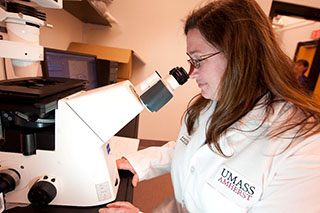 In 2017, Vandenberg was selected by the Collaborative on Health and the Environment (CHE) as one of its 20 Pioneers Under 40 in Environmental Public Health recognizing her work to build critical knowledge of environmental health science to protect the health of children, families, and communities.
(Photo courtesy of Laura Vandenberg, UMass Amherst)

For pretty much my entire research career, I’ve been studying the mammary gland – I’m interested in what happens to the mammary gland when we’re exposed to estrogenic chemicals, especially during a sensitive time in life. Laura Vandenberg, Ph.D.

NIEHS grantee Laura Vandenberg, Ph.D., studies how early life exposures to endocrine disrupting chemicals (EDCs) can predispose people to develop diseases later in life. Her research focuses on how low doses of EDCs can alter gene expression, cell differentiation, and tissue organization, and how these changes may impact overall breast health and the mammary gland.

Endocrine disruptors are chemicals that can interfere with hormones in the body, producing negative developmental and reproductive effects. Mammary gland development is normally guided by naturally-occurring hormones, but EDCs can alter normal development, especially during critical stages: prenatal development, puberty, and pregnancy.

From a young age, Vandenberg has had a strong interest for developmental and molecular biology. “This fascination led me to seek answers to questions, like: How are the organs of the body created? What events had to occur at specific times to create healthy organs? And which environmental influences can affect those healthy events?” explained Vandenberg.

Graduate Research Paves the Way for a Career Studying EDCs

As a graduate student at Tufts Medical School, Vandenberg worked with Ana Soto, M.D., where she studied how exposure to the chemical bisphenol A (BPA) influences mammary cancer risk in mice. During this time, she became increasingly passionate about applying her knowledge in developmental biology to address important public health problems.

Vandenberg now leads her own laboratory as an associate professor of environmental health sciences at the University of Massachusetts (UMass) Amherst’s School of Public Health and Health Sciences. Using mice as model organisms, she studies how an array of chemicals can influence mammary gland development, behavior, and cancer risk. For instance, her benchmark research has provided insight on how bisphenol S (BPS), a common replacement for BPA, may affect maternal behavior and brain activity.

More recently, she has turned her attention to understanding the impacts of chemicals associated with unconventional oil and gas (UOG) operations, also known as hydraulic fracturing or fracking. Fracking is a method where water, sand, and a mix of chemicals are forced into drilled wells, causing the shale to crack and release natural gas or oil for collection. 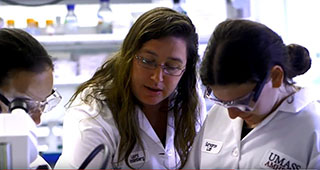 Working closely with students at her UMass lab, Vandenberg is passionate about educating the next generation of environmental health researchers. “I think the main things that help people succeed in science are persistence and curiosity,” she said.
(Photo courtesy of Laura Vandenberg, UMass Amherst)

In recent research, Vandenberg along with Susan Nagel, Ph.D., of the University of Missouri-Columbia looked at how the chemicals used in the UOG process may impact mammary gland development. Their results suggest that even low levels of the chemicals often found near fracking sites may lead to abnormal development of breast tissue.

Vandenberg, Nagel, and colleagues created a mixture of 23 chemicals commonly used in the UOG process, which have been identified in drinking water samples close to UOG operations. The 23 chemicals are all known or suspected EDCs. The researchers added the UOG mixture or a control substance without UOG chemicals to the drinking water of pregnant mice. After the pups were born, the researchers analyzed the mammary tissue of female offspring both before puberty and in early adulthood.

“Our study results suggest that the mammary gland is sensitive to chemical mixtures used in fracking production – we saw the development of lesions in the mammary gland, even when chemicals were at low doses,” said Vandenberg. “These results are particularly significant because they suggest harm from chemicals that have been poorly studied, but are commonly used, with widespread human exposure. More than 17 million Americans live within a mile of an oil and gas well.”

Moving forward, Vandenberg will focus her research on vulnerable periods of development, especially changes in the mother during pregnancy. For example, she wants to explore how EDCs may alter lactation, or a mother’s ability to produce milk.

“We’ve known for decades that developing fetuses are vulnerable to EDCs; but we have only known for the last five or so years, that the mother is also especially susceptible to these chemicals – and we don’t know how or why,” said Vandenberg. “So, this research avenue provides important insight into what’s happening in the mother’s breast tissue during pregnancy and lactation.”

Ultimately, Vandenberg hopes her pioneering research will build critical knowledge of how the environment affects human health, while building momentum to find solutions. “Even if I just stick to one organ, the breast, we have a lot of work to do to understand how the environment might affect its normal function, leading to disease,” said Vandenberg. “The work that goes on in my lab, and my collaborators’ labs, has the potential to help us understand – and address – a wide array of important public health issues.”