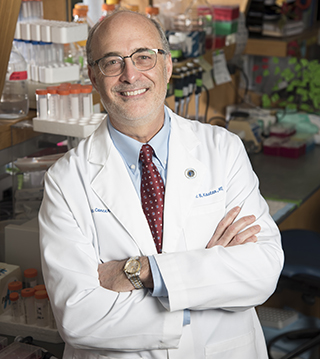 Kastan is a visionary leader in cancer research and care. He was previously a professor of oncology, pediatrics, and molecular biology at Johns Hopkins University and chair of the Hematology-Oncology Department. He also previously directed the Cancer Center at St. Jude Children's Research Hospital.
(Photo courtesy of Michael Kastan)

Michael Kastan, M.D., Ph.D., is renowned for reporting the cellular and molecular events involved in the initiation of cancer and its progression. He has been studying these underlying biological mechanisms to improve cancer treatment strategies for more than three decades.

Kastan is the executive director of the Duke Cancer Institute and the William and Jane Shingleton Professor of Pharmacology and Cancer Biology at Duke University. A pediatrician and an accomplished laboratory scientist funded by NIEHS, Kastan is a leading expert on how cells respond to DNA damage, and how that impacts human cancer.

Following his clinical training as a pediatric oncologist, Kastan started his own lab to study how DNA damage influences the way cells progress through the normal cell cycle. DNA damage can be caused by exposure to radiation, certain hazardous chemicals, and can also occur through the normal aging process.

“Studying what happens at a cellular and molecular level is critically important to learning how to manipulate these events to prevent or treat disease,” Kastan said. “I’ve always been interested in the process of DNA damage and repair and how that affects both the development of cancers and the response of cancers to various therapies.”

Kastan is well known for his contributions to understanding the role of two proteins, known as p53 and ATM, in protecting against cancer. With his first NIEHS grant, which has been continuously funded for the last 25 years, Kastan discovered that p53 plays a critical role in helping cells respond to DNA damage. His work demonstrated how loss of p53 function could contribute to tumor development and suggested why mutation of p53 might also affect how tumors respond to chemotherapy or radiation therapy.

Another discovery showed that ATM is involved in a signaling pathway to help cells respond to damage by activating p53. ATM and p53 are responsible for controlling how a cell progresses through the cell cycle, when they stop dividing, and when a cell is programmed for cell death.

NIEHS funding has been a centerpiece of this work and has enabled us to follow our research as it evolves in interesting and unexpected ways. Michael Kastan, M.D., Ph.D.

Kastan’s work helped establish the first steps in what is now commonly known as the DNA damage response (DDR) pathway, including important initiating events in how cells respond to damage. These discoveries provided early insight that continue to inform our understanding of cancer and new approaches for treatment.

“Our ongoing work has been focused on understanding how cells recognize damage, trigger the p53 response, and how p53 controls what happens to normal cells and tumor cells,” noted Kastan.

“These findings reveal a whole new arm of the DDR pathway that helps cells deal with DNA damage when they are exposed to radiation or hazardous chemicals,” Kastan said. “This pathway regulates alternative splicing of p53 and many other gene products, and controls when cells stop dividing in response to DNA damage.”

Kastan and his team are now studying the molecular mechanisms by which DNA damage leads to alternative splicing and the significance of this pathway in controlling the outcome of cells. Moving forward, Kastan’s team is also exploring the possibility of selectively controlling the observed changes in p53 to preserve its beneficial function while reducing unwanted damage to healthy cells.

Through their understanding of the mechanisms involved in DNA damage, Kastan and his team are learning how to design therapies to improve cancer treatment.

His team has been working to develop small molecule inhibitors that target ATM and related enzymes to make cancer cells much more sensitive to radiation therapy. By increasing the effectiveness of cancer treatments, doctors can also lower the dose required to successfully treat cancer.

Kastan’s research is also exploring approaches to stop p53 from being activated. This would help protect normal cells and would reduce the occurrence or severity of cancer treatment side effects like nausea, immune suppression, and hair loss.