Racette is the Robert Allan Finke Professor of Neurology and executive vice chair of the Department of Neurology at Washington University, as well as an honorary professor of public health at the University of Witwatersrand in Johannesburg, South Africa. His research focuses on uncovering the environmental and occupational factors that influence PD.
(Photo courtesy of Brad Racette)

NIEHS grantee and neurologist Brad Racette, M.D., has long been interested in movement disorders, specifically Parkinson's disease (PD). His career has been largely influenced by personal experiences in the clinic, as well as in the field of epidemiological research.

Racette developed a great interest in neurology during his residency at Barnes Hospital, an affiliated teaching hospital of Washington University in St. Louis, Missouri. "My interest in neurology was motivated by excellent guidance I received from my clinical and research mentor, Joel Perlmutter," said Racette. "I knew that the diseases I witnessed in the field of neurology would sustain my interest for a lifelong career."

From the Clinic to the Field: Linking Occupational Exposures and PD

Racette's career began as a clinical neurologist and movement disorders specialist in 1998; however, his interest later evolved to explore how different factors influence a person’s risk of PD.

In 2002, Racette received funding for his first career development research award from the National Institute of Neurological Disorders and Stroke (NINDS) to study the genetic epidemiology of PD. His research later transitioned from a focus on genetics towards uncovering the environmental and occupational factors that influence risk of PD, such as exposure to toxic metals. “Due to clinical interactions with patients who were welders, I became really interested in studying how occupational exposure to manganese is associated with PD,” Racette said.

Between 2007 and 2009, he received NIEHS grant funding to explore the epidemiology and biomarkers of PD risk in a cohort of welders. Partnership with the International Brotherhood of Boilermakers helped Racette and his research team identify and enroll a union-based group of 1,000 shipyard welders in Wisconsin, whom they have now followed for more than 10 years.

I am extremely grateful for the funding and support I have received from NIEHS over the years. My research on Parkinson’s disease has become exponentially more sophisticated over time, and my initial NIEHS research grant really provided a great foundation for all of my research efforts up to this point. Brad Racette, M.D.

Racette and colleagues have also discovered that chronic exposure to manganese can result in manganese deposition in the basal ganglia, a specialized group of brain cells that process motor (movement) and sensory information. To look more closely at the impact of manganese exposures on certain areas of the brain, Racette and his team are currently working on a longitudinal imaging study, where they are comparing PET and MRI scans from a subset of the manganese-exposed welders to non-welder controls. Data from this unique imaging study, combined with preliminary data on metabolites in welders’ blood and urine samples, will shed light on the mechanisms behind manganese-induced neurotoxicity and PD risk.

From the U.S. to South Africa: International Collaborations to Explore Biological Mechanisms of PD 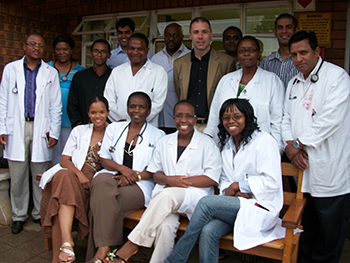 NIEHS grant funding and support also provide Racette with protected time for mentoring students and helping them develop their careers. In the picture above, Racette is shown with students at the Medical University of South Africa in Pretoria.
(Photo courtesy of Brad Racette)

Through collaborations with colleagues in South Africa, Racette was introduced to an occupational-based autopsy program made possible by the Occupational Diseases in Mines and Works Act (ODMWA). "Through ODMWA, the South African government has compensated families of miners who develop work-related respiratory diseases, such as asbestosis or silicosis, for over 100 years," Racette said. "Any miner that dies in South Africa is eligible for heart and lung autopsy, and the program is a great model and resource for epidemiological data collection."

From the Workplace to Communities: Investigating Residential Manganese Pollution and Neurological Outcomes in South Africa 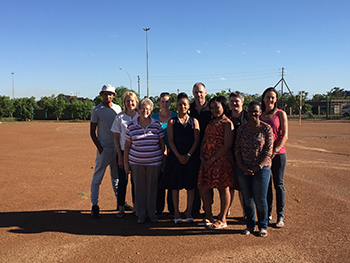 Racette and his team have found neurologic effects in welders and miners at levels of manganese exposure below federal regulatory standards enforced by the Environmental Protection Agency and the Occupational Safety and Health Administration. They anticipate that exposures at even lower levels in non-occupational settings are also associated with neurological dysfunction.

While doing work in South Africa, Racette and his team were approached by residents of the Meyerton community who expressed concerns about manganese emissions from a local smelter. In 2015, they received NIEHS funding to study the association between exposure to manganese from the smelter’s emissions and neurological health outcomes for 1,000 adult residents in the surrounding community. Racette and his team are continuing to collect data, including environmental and personal air samples and measures of motor, cognitive control, and mood dysfunction for adults in Meyerton. A 2017 grant funded by the NIEHS Virtual Consortium for Translational/Transdisciplinary Environmental Research Program will provide Racette and his team with opportunities to investigate other mechanisms of manganese-induced neurotoxicity. They will explore how epigenetic changes, which modify the way genetic information is expressed without directly changing DNA, play a role in neurological dysfunction following manganese exposure.