Studying the Biological Mechanisms of Parkinsonism 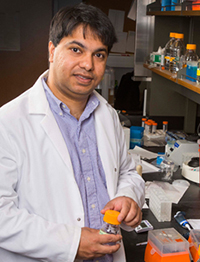 Pharmacologist Somshuvra Mukhopadhyay, Ph.D., from the University of Texas at Austin, is working to understand the genetic and environmental factors that contribute to parkinsonism, which causes Parkinson’s disease-like movement problems. By providing important insights into the biological processes involved in the condition, Mukhopadhyay’s research might one day inform the development of new drugs that help people with parkinsonism.

Examining disease from the molecular level

Mukhopadhyay first became interested in the biology of disease when he was in medical school and saw the lack of treatments for patients with neurological diseases. “I felt that research was the only way to understand how these diseases develop so that treatments could be found,” he said.

Mukhopadhyay is working to understand how changes in the body’s regulation of manganese can lead to the disease and how the body protects against manganese toxicity. “If we can understand how parkinsonism develops at the molecular, cellular, and animal levels, that might give us enough information to make small molecules that could fix biological processes that aren’t working correctly,” he said. “Whatever we learn about manganese will probably also be applicable to neurotoxicity from other metals and might even hold implications for treating other forms of parkinsonism, including Parkinson’s disease,” he said.

With funding from NIEHS, Mukhopadhyay and his colleagues, found that a protein known as SLC30A10 transports manganese out of cells. In cells with SLC30A10 mutations, manganese becomes trapped in the cell, where it rises to toxic levels.

“Other researchers had reported that people with mutations in both copies of their SLC30A10 gene will develop parkinsonism and have high levels of manganese in their brains,” explained Mukhopadhyay. “Our work then revealed the mechanism by which the SLC30A10 protein and gene mutations led to parkinsonism.” 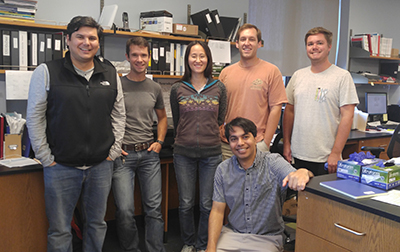 In 2016, Mukhopadhyay received funding through the NIEHS Outstanding New Environmental Scientists (ONES) program to use mouse models to further study SLC30A10. Mukhopadhyay and his colleagues were surprised to find that mice without the SLC30A10 protein exhibited high manganese levels in the thyroid and that manganese accumulation led to hypothyroidism. Although the researchers expected to find high manganese levels in the brain, liver, and blood, they did not expect it to accumulate in the thyroid.

“The thyroid plays a crucial role in regulating neurological development and function,” said Mukhopadhyay. “Our findings suggest that perhaps thyroid dysfunction is an unappreciated feature of manganese toxicity that exacerbates the direct neurotoxic effects of manganese.”

As part of the ONES award, Mukhopadhyay and his colleagues also continue to study the mechanism by which SLC30A10 regulates manganese levels in the brain and protects against the onset of parkinsonism. One way they are doing this is by creating mouse models in which SLC30A10 is suppressed in specific tissues, such as only in the brain or the liver.

The importance of mentors

Mukhopadhyay said that the ONES Award, which is typically awarded to early career scientists, has been instrumental in not only allowing him to study parkinsonism but also in helping him to transition to an independent investigator. He also gives credit for his success to the many mentors that provided guidance throughout his career.

Mukhopadhyay is now learning how to be a successful mentor himself. One of his students, Charles Zogzas received a Ruth L. Kirschstein Predoctoral National Research Service Award from NIH. “Charlie is interested in working in industry after he finishes graduate school,” said Mukhopadhyay. “Through mentoring him I have learned a lot more about what industry careers are available for graduate students. This has made me a better mentor because I don't assume that all students want to take an academic track.”