Developing a Landmark Resource for Arsenic Research: the HEALS Cohort Ahsan’s research focuses on the relationship between environmental and genetic factors in disease, and on developing intervention strategies to protect human health.
(Photo courtesy of Habib Ahsan)

For the last 20 years, NIEHS grantee Habibul Ahsan, M.D., has been studying the role our environment plays in human disease.

A physician by trade, Ahsan recalls a groundbreaking article in the New York Times that implicated arsenic-contaminated drinking water with skin diseases in Bangladesh and parts of India. Originally from Bangladesh himself, Ahsan became passionate about studying global environmental health.

“I became interested in studying environmental epidemiology, particularly in low- and middle-income countries, because these places not only bear a disproportionate burden of the disease associated with environmental factors, they also are least equipped to deal with them,” noted Ahsan.

Across the globe, nearly 200 million people are exposed to unsafe levels of arsenic in their drinking water. While known to be poisonous in high doses since ancient times, our understanding of how arsenic impacts health at low doses is evolving. Today, there is a growing body of evidence demonstrating that arsenic is associated with increased risk of health problems including cancer, cardiovascular and respiratory diseases in adults, and neurodevelopmental problems in children. 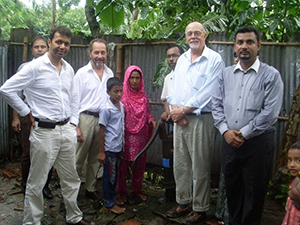 Ahsan, front left, pictured next to Graziano and SRP Director Bill Suk, Ph.D., stands with HEALS participants next to a well that the team installed. The well is marked with a blue tag, indicating that the water is safe for drinking.
(Photo courtesy of Habib Ahsan)

Ahsan and collaborators founded a large prospective cohort study in Bangladesh in 2000, which has become a major contributor to what we know about how arsenic-contaminated water and food impact human health. The cohort was initially founded as part of the Columbia University Superfund Research Program (SRP) Center.

Ahsan worked with Center Director Joseph Graziano, Ph.D., who was applying for funding through the NIEHS SRP, to include its flagship project establishing the Health Effects of Arsenic Longitudinal Study (HEALS) cohort in Bangladesh.

“The NIEHS SRP support provided a unique opportunity to study the complex environmental health issues in the HEALS cohort and to develop intervention strategies to improve health outcomes,” noted Ahsan. “Much of our success over the years is due to contributions from the entire multidisciplinary team, including epidemiologists, nutritionists, social scientists, biomedical researchers, and environmental scientists. Their collective and complimentary expertise has been crucial to everything we’ve achieved.”

The study population is located in rural Bangladesh with limited infrastructure. To conduct research and assess the health outcomes of arsenic exposure in this population, the team needed to establish health clinics throughout the study area to collect medical data. 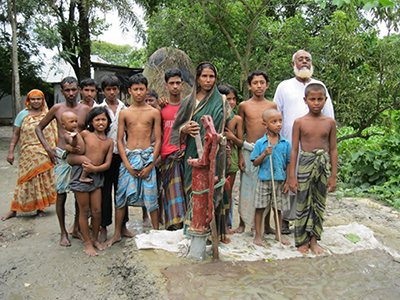 A HEALS participant, center, and her family members and neighbors stand behind a well that has been painted red to warn that the water has high levels of arsenic.
(Photo courtesy of Habib Ahsan)

“Establishing these health clinics had the dual benefit of enabling us to collect the health data we needed while also providing our study participants and their families with access to free or significantly subsidized healthcare, which they did not have before,” Ahsan said.

The Columbia SRP Center team has also measured arsenic concentrations in every well in the study area. This information is shared with the community to inform personal decision making. If the closest well has elevated levels of arsenic, the team provides information on the closest safe well to collect water from. Participants also receive health education, including information about the possible health impacts of arsenic exposure and strategies to reduce their personal exposure.

“We also helped the community through a 10-year clinical intervention trial funded by the National Cancer Institute,” Ahsan said. The team provided 7,000 members of the cohort who had high levels of arsenic exposure and signs of arsenic-related toxicity with vitamin E and/or selenium supplements. “We are now in the process of analyzing the data for publication, and evaluating whether these supplements could reduce the risk of various health problems resulting from arsenic exposure,” he noted.

The evolution of a landmark research resource

Beginning with 12,000 residents in 2000, the cohort has expanded to include 35,000 members. Over the years, HEALS has directly linked arsenic exposure to negative influences on human health.

Some of the key findings on arsenic from this cohort include:

HEALS as a Resource for Decision Makers

Data from the HEALS cohort has been used to inform the U.S. Environmental Protection Agency’s toxicological review for arsenic.

Data from this cohort supported the primary analysis for the dose-response assessment for non-malignant health effects, the assessment of dietary sources of arsenic exposure, and the consideration of susceptible populations for the previous recommendation on arsenic.

Both Ahsan and Graziano served on the National Academy of Sciences committee advising EPA with the arsenic analysis.

“With the generous support of SRP and support from Columbia University and the University of Chicago, HEALS has become a landmark research resource to understand the health effects and underlying biological mechanisms of arsenic exposure,” asserted Ahsan. “It is a one of a kind, unique resource that we have worked very hard to make accessible to and usable by the scientific community.”

Ahsan’s research team at the University of Chicago, and collaborators at Columbia, have made data, biological samples, hydrogeochemical data, and environmental samples widely accessible to scientists across the country and around the world. Together these diverse groups of researchers have produced more than 150 high quality publications based on HEALS data.

The HEALS cohort has also served as a springboard for many junior investigators who have used this resource to pursue new research questions and advance their careers in the field.

A finer focus on exposures and health impacts

Ahsan and his research team plan to continue following the study participants and adding new participants. With more years of data and a larger cohort size, they can explore research questions in much finer detail.

“Our early work looked at the association between arsenic and cardiovascular disease, for example,” said Ahsan. “Now we can ask more interesting questions, like what is the relationship between arsenic exposure and specific types of cardiovascular disease, such as ischemic heart disease, hemorrhagic stroke, or ischemic stroke. With more data and more statistical power we can delve deeper in to these very specific questions about the broader health effects we identified before.”

“We are also able to look at health outcomes and diseases that might be associated with very low levels of exposure,” he noted. “For example, we now have a large enough sample size to investigate health effects that might occur at exposures less than the current EPA standard of 10 μg/L, which is not only relevant for the population in the United states, but for people all over the world who might have similar exposure levels.”

The team has also collected other data that opens the door for endless research opportunities, such as detailed questionnaires on diet and social factors, combined with the biological samples collected over time. With this valuable resource, Ahsan and collaborators across the globe will continue to provide new insight into the molecular and genetic basis of arsenic exposure and toxicity.