Teresa Woodruff, Ph.D., an expert in ovarian biology, speaks during a December 2014 lecture at NIEHS.

Funding for development of the 3-D, microfluidics model developed by Woodruff and colleagues is backed by several research agencies within the NIH, including NIEHS, the National Center for Advancing Translational Sciences, the Office of Women’s Health Research, and the Eunice Kennedy Shriver National Institute of Child Health and Human Development.

The model is the main project within the NIH Tissue Chip Program supported by NIEHS, and is an exciting approach for environmental health scientists to explore the potential reproductive toxicity of environmental toxicants and pharmaceuticals.
(Photo courtesy of Steve McCaw, NIEHS)

Historically, a large portion of biomedical research has been conducted using only male animals or ignored the issue of sex completely. To address this issue, the National Institutes of Health (NIH) announced a policy requiring the balance of sex in animal studies for preclinical, biomedical research.

Teresa Woodruff, Ph.D., founding director of the Women’s Health Research Institute and leader of the Oncofertility Consortium at Northwestern University, is passionate about the inclusion of sex and gender in the fields of science and medicine. Woodruff and her colleagues are taking major strides to implement experimental designs that include male and female-specific tissues as well as animals in laboratory studies. These studies are particularly relevant for preclinical testing of drug interactions with reproductive organs.

Unlike men, women produce a limited number of reproductive cells, called oocytes, or eggs. Individual oocytes grow and mature in ovarian follicles, and are later released during the menstrual cycle in a process that is tightly controlled by hormones such as estrogen and progesterone. During each cycle, a dominant follicle is selected, and its corresponding oocyte is released.

Woodruff and colleagues are studying how individual ovarian follicles develop, how they communicate with the oocyte, and how they are selected over the period of a woman’s life, from puberty to menopause. “Initially, we started studying these research questions in a petri dish,” Woodruff stated. “This allowed us to probe for answers related to hormone production in the follicles, but we weren’t able to obtain a high quality mature oocyte.” The mature oocyte is significant for the study of a realistic female reproductive cycle.

To address this challenge, Woodruff collaborated with Shuo Xiao, Ph.D., an expert in reproductive toxicology, other colleagues at Northwestern University, and Draper Laboratories in Cambridge, Massachusetts to develop a model which is the very first of its kind. The model, funded in part by NIEHS and the NIH Microphysiologic System (Tissue Chip) Program, is a three-dimensional, microfluidics system that mimics the biological cells and tissues of the human female reproductive tract. The microfluidics component of the model is an advanced technology, and gives them the ability to culture and study the functionality of individual cells (follicles and oocytes) and tissues (ovary, cervix, and uterus), as well as the cross-talk that occurs between these major cells and tissues in the female reproductive tract as a whole. “The development of this kind of dynamic, three-dimensional system changes the game in a fundamental way – instead of studying tissues in static culture – basically flat plastic petri dishes – we are taking a giant step forward to understanding tissue-level function when those tissues are communicating with each other in a dynamic way,” Woodruff stated. 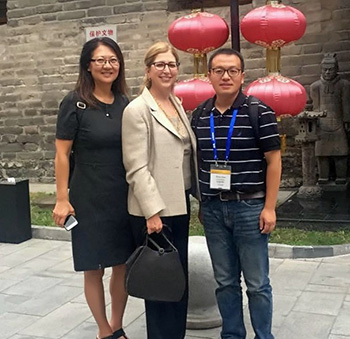 They have also demonstrated that biological cells and tissues within this model can be cultured and survive for a month, a period of time that is representative of a woman’s ovarian (menstrual) cycle. “Having the capacity to study these factors within the context of a woman’s month-long menstrual cycle is really significant,” J. Julie Kim, Ph.D., expert in reproductive biology and collaborator on the project, stated. “This gives us the ability to study fluctuating levels of hormones, mainly estrogen and progesterone, during the ovarian cycle, and to identify biological factors in multiple organs that are dependent on these changes.”

The model holds great potential as a tool for screening chemicals that may adversely impact the function of female reproductive tissues and organs. A preliminary study showed that the model can be adapted as an in vitro follicle growth assay to determine the impact of different compounds on markers of ovarian function. More specifically, the study demonstrated that the assay can distinguish the effects of chemicals with known reproductive toxicity, from those that are non-toxic. “I believe this model will provide opportunities to obtain more rapid, efficient results for research in environmental health and reproductive toxicology,” Xiao mentioned. “For example, it will give us the capacity to test the impact of several chemicals on reproductive tissues at the same time, and at different doses.”

Woodruff and Xiao are particularly interested in adapting the model for high-throughput female reproductive toxicity screening of endocrine disrupting chemicals and pharmaceuticals. They are currently testing a series of 12 drugs that are in development for a pharmaceutical company. “If we think about the utility of these systems in the future, results from these kinds of tests will help steer certain drugs toward one sex or the other, or to women of postmenopausal age,” Woodruff stated. They are also working on developing a male microfluidics model that includes testis and prostate tissues to parallel the female system for reproductive toxicity testing. “Ultimately, the microfluidics model provides an enabling technology to achieve a safer drug more quickly, due to the capability to determine the reproductive toxicity of pharmaceuticals earlier in the pipeline. From a public health perspective, this is very exciting,” Woodruff added.

New Collaboration and Next Steps

The microfluidics technology has also provided opportunities for collaboration with scientists in other areas of research. For example, Woodruff and colleagues are currently working with Steven George, M.D., a biomedical engineer at Washington University in St. Louis, who has developed his own microfluidics system to study the biology of endothelial cells, which are cells that line the inner surface of blood vessels. “We know that the uterus is a very dynamic tissue that changes during every menstrual cycle, and these changes are dependent on blood vessels,” Kim stated. “We are collaborating with him to determine how hormones regulate blood vessels in tissue cultures of the uterus.”

Moving forward, Woodruff and colleagues will continue to test the utility and effectiveness of the microfluidics technology in years to come. They are currently working on additional 3-D models to further explore issues related to reproductive biology.  “We are working on a model to study the placenta,” Woodruff stated. “Pharmaceutical drugs are never tested for pregnant women, and we anticipate this model will give the drug industry an early view on whether certain drugs cross the placental barrier, or if they will adversely affect downstream reproductive tissues.”