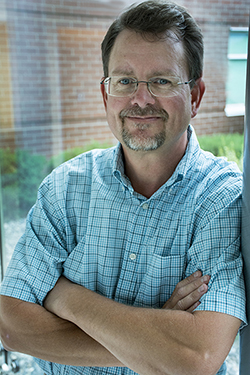 Brian Thrall, Ph.D., directs the NIEHS-funded Center for Nanotoxicology at the Pacific Northwest National Laboratory (PNNL). “Our work spans fundamental cell biology, biochemistry, computational biology, all the way up to whole animals, and developing computational strategies link these areas,” Thrall stated. “Our collaboration with other consortia within the NIH Nano EHS community over the past decade has been incredibly valuable in bringing a broad diversity of perspectives for our research.”

The use of engineered nanomaterials (ENM) in biomedicine, consumer products, food packaging, and energy, has increased drastically in recent years; in fact, the number of ENM products on the market is projected to double every three years. Although these advances are poised to significantly improve energy efficiency and human health, the increasingly widespread use of ENM technologies has raised concerns among decision makers and the general public.

Developed at the same scale as biological molecules, ENM can interact with human cells in unintentional ways; however, the specific mechanisms by which ENM interact with and alter human cells and tissues is not well understood. NIEHS grantee, Brian Thrall, Ph.D., director of the NIEHS-funded Center for Nanotoxicology at the Pacific Northwest National Laboratory (PNNL), leads a multidisciplinary team of researchers who are using cutting edge techniques, including genomics, proteomics, bioinformatics, and imaging, to understand the potential health risks that are associated with ENM.

Traditionally, nanotoxicology broadly measures the potential of a certain nanomaterial to induce oxidative stress, which helps predict the likelihood of cell death. However, Thrall is more concerned about low levels of ENM-induced oxidative stress that do not result in cell death. “One of our limitations is knowing what the early targets and downstream impacts of oxidative stress are in cells, and how these affect normal cellular function.” To address this research question, Thrall and colleagues, with technical innovations led by Wei-Jun Qian, Ph.D., from PNNL’s proteomics research team, developed and applied a novel technique, called quantitative redox proteomics. Compared to traditional toxicology assessments, this technique provides more sensitive and specific information about changes in cellular proteins that might not lead to cell death, but that could still have important impacts on normal cellular function.

Thrall and colleagues used quantitative redox proteomics in a recent study to identify molecular targets of oxidative stress in specialized immune cells called macrophages. Study results showed three different types of ENM changed macrophage proteins via S-glutathionylation (SSG) – a protein-modifying mechanism that can potentially alter biological functions, such as immune response, inflammation, and regulation of cell death. Interestingly, the exact proteins and protein sites that were modified by the ENM revealed: 1) specific molecular pathways that were more susceptible to low levels of oxidative stress, and 2) other pathways that were triggered at high levels of oxidative stress, eventually leading to cell death. This work sheds light on the complex pathways by which ENM disrupt the ability of macrophages to protect the body from environmental stressors, and how ENM could potentially increase an individual’s susceptibility to infection. "In the real world, we’re exposed to many different contaminants and disease-producing agents, or pathogens, at the same time”, Thrall said. “When macrophages are exposed to nanomaterials, which cause oxidative stress, they tend to shut down their normal function of breaking down foreign substances. We are interested in understanding if someone is exposed to a pathogen and macrophages aren’t functioning properly, is he or she more likely to get an infection?”

Moving forward, Thrall and his team plan to use quantitative redox proteomics to investigate the toxicity for a broad range of ENM, and then use this data to develop a predictive nanotoxicology framework. “Developing predictive approaches for nanotoxicology is very challenging”, Thrall noted. “It requires a very multidisciplinary effort.” He is hopeful that this predictive framework will be useful for high-throughput screening of ENM. This would help prioritize nanomaterials for more robust hazard assessment and identify specific ENM properties that have adverse health effects. Ultimately, this research will not only improve risk assessment of ENM, but also provide scientists with valuable information to design safer ENM products in the future.