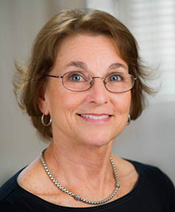 Virginia Rauh, Sc.D. is a perinatal epidemiologist and deputy director of the Columbia Center for Children's Environmental Health.
(Photo courtesy of Virginia Rauh)

Virginia Rauh, Sc.D., and her colleagues at the NIEHS/EPA-funded Columbia Center for Children’s Environmental Health have been following a group of children for 18 years to better understand how the ambient air environment influences children’s health. Their research has revealed important insights into how prenatal exposures can affect the brain and neurodevelopment throughout childhood and, potentially, into later life.

In the late 1990s, Rauh began to work with members of the Columbia University Environmental Health Sciences Department to conceptualize a cohort study that would follow a group of children prospectively throughout development with the goal of identifying environmental determinants of health over time. “I brought a psychosocial and developmental perspective to the interdisciplinary group,” she said. “I was also interested in how factors such as family conditions, economic disadvantage, and other stressors affected children’s health.”

After receiving funding for the Children’s Center from NIEHS, recruitment of low-income minority pregnant women living in northern Manhattan communities began in 1998. The researchers measured a variety of biomarkers of exposure in more than 700 women during pregnancy and at the time of delivery, and then followed the mothers and children with assessments every two years.

“Because we have maintained such close contact with the families over time, we’re able to get a detailed picture of how a child is developing, and what kinds of exposures and experiences are influencing the trajectory of brain and behavioral development both positively and negatively,” said Rauh.

A few years into recruitment, the EPA phased out the indoor residential use of the common organophosphate insecticide chlorpyrifos, creating a natural experiment in which children born before and after the ban could be compared. “The EPA ban in 2001 was extremely effective,” said Rauh. “By 2003 and 2004, babies born into our cohort showed significantly lower levels of chlorpyrifos, as measured in umbilical cord blood.”

Assessments conducted when the children were 7 years old showed that the children exposed to higher levels of chlorpyrifos prenatally exhibited greater deficits in IQ and working memory — abilities with important implications for school success. Around the same time, researchers from two other NIEHS Children’s Centers studying different cohorts of children, using different biomarkers of exposure, also reported associations between prenatal organophosphate pesticide exposures and diminished cognitive function in early childhood, lending strength to the evidence that such exposures have observable adverse effects on child cognition. The papers published by these three groups were named collectively “Paper of the Year” for 2012 by Environmental Health Perspectives. 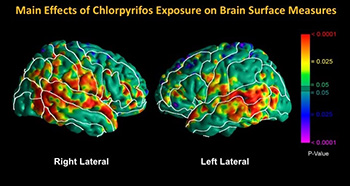 Using magnetic resonance imaging (MRI), Rauh and her colleague Bradley S. Peterson, M.D., found that children ages 5 to 11 with higher prenatal exposure to chlorpyrifos exhibited differences in volume for brain regions associated with attention, social cognition, and a number of other neuropsychological functions.

More recently, the researchers found at the 12-year assessment that the children with higher prenatal exposures to chlorpyrifos were more likely to have moderate tremor and also showed some differences in a part of the brain that may be related to movement. Since adult exposures to high levels of chlorpyrifos have been linked with the subsequent development of motor problems, including Parkinson’s Disease, evidence of motor differences, however mild, in this young cohort is worrisome.

“This does not necessarily mean that early exposures to organophosphate insecticides are causally related to Parkinson’s disease, but the findings suggest evidence of associated deficits in the motor arena,” said Rauh. “The full implications of these findings are not known and may not be known for some time. However, as the children develop we are performing additional motor and movement assessments to determine whether they are at any increased risk for developing further neurological symptoms and possibly a clinical disorder.”

Rauh and her colleagues are continuing to study these children, the oldest of whom are now turning 18. They hope to secure funding to follow the children into adulthood to see if the observed neurodevelopmental problems persist and to see how those deficits might correspond with repeated brain images over time.

“Professionally, it is very rewarding to design and participate in a research process spanning early data collection, assessment, and long-term follow-up to a point where we are producing findings that could potentially affect public health policy,” said Rauh. “It has been a remarkable experience.”