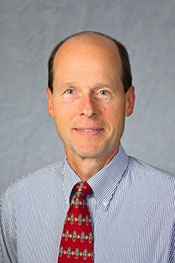 Bernhard Hennig, Ph.D. has been a part of the UK SRP Center since 1997 and has led the Center since 2003. He says that this experience has helped direct his research path toward studying the links between nutrition and the effects of environmental pollutants.
(Photo courtesy of Bernhard Hennig)

NIEHS grantee Bernhard Hennig, Ph.D., is at the forefront of research that studies the link between diet and exposure to environmental stressors. He uses his expertise in biochemistry to understand how good nutrition can counteract the negative health effects of exposure to harmful chemicals.

Hennig is a professor at the University of Kentucky (UK) and director of the UK NIEHS Superfund Research Program (SRP) Center. His work focuses on how nutrition modulates the effects of chlorinated organic compounds, including polychlorinated biphenyls (PCBs), which are common at Superfund sites in Kentucky and nationwide.

“Even if we try to detect and remediate pollutants, we will never be able to successfully remove all harmful contaminants,” said Hennig. “Identifying how to use nutrition to lessen harmful effects may provide the most sensible means to develop prevention and intervention strategies for diseases associated with many environmental toxicants.”

Since 2003, Hennig has led a UK SRP Center project focused on Superfund chemicals, nutrition, and cellular dysfunction. Through this work, Hennig and his team have discovered that some components of the diet can interfere with cellular function, while others can protect against cell damage, such as oxidative stress and inflammation, from exposure to PCBs.

“A lot of negative health outcomes, such as cardiovascular diseases, obesity, and type 2 diabetes, are associated with oxidative stress and inflammation,” said Hennig. “We can potentially reduce oxidative stress and inflammation through diet in a number of ways, including consumption of fruits and vegetables that have antioxidants and anti-inflammatory components. This would help improve health outcomes and reduce effects from exposure to environmental contaminants.”

They have shown that the type of fat in the diet, not just the amount of fat, can make a difference in cellular damage triggered by environmental chemicals. In one study, they observed increased vascular inflammation in mice that were exposed to PCBs and fed a diet enriched with corn oil. However, they saw little negative effect in mice with the same PCB exposures fed a diet enriched with olive oil. These findings are significant because vascular inflammation contributes to diseases such as atherosclerosis. In another study, they discovered that a diet with a high ratio of omega-3 to omega-6 fatty acids can reduce cellular damage caused by PCBs and other pollutants.

Hennig and his team also found that a diet supplemented with green tea decreases oxidative stress induced by PCBs. In another study, they discovered that diets rich in polyphenols, which are antioxidants found in fruits, vegetables, and other plant foods, can reduce the risk for PCB-associated type 2 diabetes.

“Research on the toxicity of environmental chemicals often only focuses on the negative,” Hennig said. “I think it is interesting to look at it in a more positive light to see how good eating habits can reduce how vulnerable we are to environmental stressors.” Hennig (right) with Michael Petriello, Ph.D., a postdoctoral researcher in his lab at a recent conference where he presented work on links between PCB exposure and circulating levels of TMAO.
(Photo courtesy of Bernhard Hennig)

Identifying mechanisms that connect diet to exposure and disease risk

In more recent work, Hennig’s team discovered that exposure to PCBs in mice led to increased levels of trimethylamine N-oxide (TMAO) in the blood. TMAO is produced when the body metabolizes certain types of foods, especially animal products. Because high levels of circulating TMAO have been linked to an increased risk for heart disease, these findings identify a new interaction linking PCBs to cardiovascular disease.

Moving forward, Hennig and his team are gathering evidence of nutrient and toxicant interactions in humans. Using blood samples from individuals in the Anniston, Alabama cohort, they are analyzing the links between circulating PCB levels in the blood to levels of TMAO and other nutritionally-relevant biological markers of disease risk.

As part of its community engagement efforts, the UK SRP Center uses different educational strategies to inform communities about the importance of good nutrition. Working with the Center’s Community Engagement Core, Hennig and his trainees have helped communicate the importance of nutrition to Kentucky communities living near Superfund sites.

“We work with communities to promote good nutrition, especially in eastern Kentucky,” said Hennig. “It is very rewarding when the information we provide helps them appreciate that good nutrition is extremely important.”

In addition to the extensive community outreach work in Kentucky, Hennig also works to inform international communities about how nutrition can mediate chemical toxicity. For example, he recently chaired a meeting in eastern Europe where he shared his expertise on how nutrition influences pollutant toxicity, and its implications for public health in a region with widespread environmental concerns.

“We are born with a combination of genes, and there is nothing we can do to change that. We are also exposed to all kids of stressors, including environmental exposures, that we often have very little control over,” Hennig explained. “But we do have some control over our lifestyle. If you are healthy, you are less vulnerable to these stressors.”

Hennig has always loved the field of nutrition and is passionate about living a healthy lifestyle. Through his research, he has learned even more reasons why it is important to be healthy and adheres to his own message with a daily jog around the UK arboretum and a diet full of fruits and vegetables.