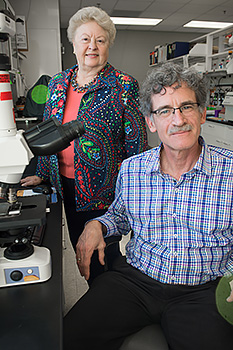 Although they had no formal collaboration prior to the first funding cycle of the MSU BCERP in 2003, Sandra Haslam, Ph.D., an endocrinologist, and Richard Schwartz, Ph.D., an immunologist, recognize the significance of each other’s expertise to further investigate how different genetic and environmental factors impact breast cancer risk throughout life. “Our combined expertise makes a perfect match for the MSU BCERP, and our collaborative work is much greater than what either of us could accomplish alone,” Haslam stated.

Recent statistics from the American Cancer Society report that roughly 1 in 8 women in the United States will develop a form of invasive breast cancer in their lifetime, and approximately 40,000 women will die from breast cancer.

Despite these sobering statistics, breast cancer research has come a long way in recent decades. Lead investigators Sandra Haslam, Ph.D., and Richard Schwartz, Ph.D., of the Michigan State University Breast Cancer and the Environment Research Program (MSU BCERP) have been at the forefront of breast cancer research since the program’s inception in 2003.

Haslam and Schwartz’s research focuses on how a combination of factors – genetics, hormones, and the environment – impact breast cancer risk. More specifically, they focus on puberty as a key window of susceptibility, because it is a period where rapid mammary gland growth can make the gland more susceptible to factors that influence breast cancer risk in adulthood. They use a particular strain of mice, BALB/c mice, to investigate how these factors impact breast cancer risk across a woman’s lifetime.

The MSU BCERP has since made great strides in understanding the detrimental long-term effects of HFD during pubertal development on breast cancer risk. Interestingly, BALB/c mice are resistant to obesity; this allows Haslam and Schwartz to separate the obesity-inducing effects of HFD from the effects of the diet itself. Results from a recent study showed that relatively short exposure to HFD during puberty caused several changes in the mammary gland, including increased mammary cell growth, increased growth factors, and recruitment of key tumor-promoting inflammatory cells. Furthermore, these effects were not reversed after switching the diets of mice from a HFD in puberty to a low fat diet in adulthood.

Their findings closely resemble data from human studies, such as the Nurses’ Health Study II, which has shown that there is an association between HFD derived from red meat and an increased risk of breast cancer for premenopausal women of normal weight. “This association was not seen in obese women, which means that the effects of HFD on breast cancer are independent of obesity-related factors,” Haslam stated.  “These findings were not very surprising to us, as we had already observed the effects of HFD in obesity-resistant mice,” Schwartz added. Therefore, it is very likely that consuming a HFD during puberty may alter breast development through one or more mechanisms, such as inflammation, and altered growth factor levels, and these effects are independent of increasing weight or obesity.

In October 2015, Haslam and Schwartz were awarded a five-year $4.15 million NIEHS grant to investigate how HFD interacts with benzophenone-3 (BP-3), a chemical found in many sunscreen products. Preliminary studies suggest that BP-3 may disrupt the body’s endocrine hormone system, acting as an estrogen, making it a potential concern for breast cancer risk.

Haslam and Schwartz will investigate the interactive effects of exposure to HFD and BP-3 in mice, and will collaborate with researchers from the University of Cincinnati to examine data and samples from a cohort of young women participating in the BCERP Growing Up Female Study to identify key molecular or cellular events that link these exposures to breast cancer. By making correlations between data from the mouse and human studies, Haslam and Schwartz will be able to better understand the biological mechanisms that are associated with these exposures, and determine if the interaction of these exposures has the potential to induce breast cancer.

“To reduce breast cancer, we need to focus on prevention,” Haslam stated. “Having found that some of these effects are incredibly significant during the pubertal time period, we have a wonderful opportunity to translate our findings to educational messages about breast cancer prevention.” Moving forward, Haslam and Schwartz plan to utilize the MSU Extension Service to coordinate outreach efforts across the state of Michigan, and to enhance messages about breast cancer prevention. “The extension group has experience delivering a variety of health messages to a broad range of audiences,” Schwartz stated. This work will be done in collaboration with MSU expert Kami Silk, Ph.D., a researcher who measures the effectiveness of different communication strategies.

“Although we’re basic scientists seeking to understand what mechanisms cause breast cancer, ultimately, we want our research to have a public health impact that helps society,” stated Schwartz. “Intervening with an educational message could potentially lead to a decrease in breast cancer incidence across populations.”