Responding to Navajo Community Concerns after the Gold King Mine Spill Chief brings science to tribal communities to empower them to understand and characterize their watersheds and to address contamination. She was named the 2016 American Indian Science and Engineering Society Professional of the Year in recognition of her work.
(Photo courtesy of Karletta Chief)

When news of the August 2015 Gold King Mine spill reached the Navajo Nation, Karletta Chief, Ph.D., was presenting her work on the environmental impacts of mining and climate change to the Navajo Nation president and other leaders. She immediately began fielding questions from the Navajo community and wasted no time in working with her colleagues at the University of Arizona Superfund Research Program (UA SRP), federal agencies, and community members to develop a list of research questions that would help provide scientific answers to the community’s questions about the spill.

The Gold King Mine spill released about three million gallons of polluted water into a tributary of the Animas River in Colorado. The water — which contained acid, salts, and toxic metals — traveled into the San Juan and Colorado rivers, flowing through six states and along the borders of 12 Native American Tribes.

Is the water safe?

“After the spill, Navajo communities were concerned about using river water for farming, which they had been doing for hundreds of years,” explained Chief, assistant professor and extension specialist at the UA SRP. “They also wanted to know if the water was really safe to use for other activities they engage in such as swimming, other recreational activities, and cultural practices.”

Shortly after the spill, Chief and her colleagues developed a fact sheet that covered the basics of what occurred during the spill and answered the most common questions they were receiving. “Leaders, educators, and others who worked with communities used the fact sheet as a reference to help communities understand the spill,” Chief said. She and other UA SRP members also provided a number of expert interviews for media coverage of the spill.

In addition to the short term effects, the Navajo communities wanted to know whether there might be long-term health effects from the spill. Through an Exploratory/Developmental Research grant from NIEHS, Chief, together with UA collaborator Paloma Beamer, Ph.D., began the research necessary to address these concerns. In addition to identifying the exposure routes and the contaminants people were exposed to as a result of the spill, the study also looked at how people’s view of the river had changed. 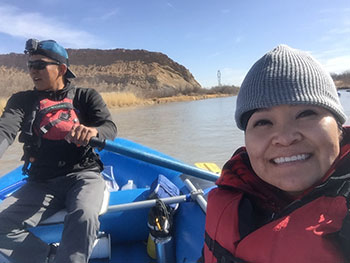 Chief samples water and sediment along the San Juan River with the help of Northern Medical Center health promotion river guides and many faculty and students from the University of Arizona, Northern Arizona University, and Dine' College as well as community members from To' Bee NihiDziil.
(Photo courtesy of Karletta Chief)

Navajo communities use the river in very unique ways, such as using plants growing near the river for medicinal purposes. This means that their exposure routes differ from those that might be used in traditional risk assessments. “Our research is going to help improve the understanding of how native people use the land and water and how they could potentially be impacted by contamination,” said Chief. “This information could be applicable to other native communities and other types of contaminants.”

The researchers began by holding focus groups in three affected Navajo communities. Participants were asked how they used the water before the spill, whether they are using the river now, and how they planned to use the river in the future. From these focus groups, the researchers developed a list of approximately 40 activities that people in these communities engage in that could be potential routes of exposure to contaminants from the spill.

The researchers also obtained river samples to analyze and conducted household sampling that involved in-home testing of lead in blood, collection of urine samples for measuring arsenic, and a dust wipe to see if arsenic and lead are deposited via the air. Through questionnaires, study participants provided detailed information on the foods they eat, their perceptions of the river, and their activities, with a particular emphasis on the 40 activities related to the routes of exposure identified previously. This data is now being analyzed. Chief with her team at Upper Fruitland Chapter, New Mexico during a listening session informing the community about their proposed research. The team includes Navajo consultants Arnold Clifford and Al Yazzie, a tribal college student, a Dine' doctoral candidate, and a professor and collaborator from Fort Lewis College.
(Photo courtesy of Karletta Chief)

Prior to the Gold King Mine spill, Chief was actively interacting with tribal communities through the UA SRP outreach and extension program. The existing partnerships she had with the Navajo Nation helped to build the trust required to do this new work. However, she noted, that it was still important that they clearly explain the research to the communities participating and gain the necessary tribal and community approvals before applying for funding. The researchers also used cultural experts and linguists to make sure their work is conducted in a culturally sensitive way

“Our work is only successful because of the support we have received from the community,” Chief said. “I’m very honored to be in the position to help the tribe answer some of their questions and concerns surrounding the Gold King Mine spill.”

Chief points out that the best way to prevent future spills is to clean up the thousands of abandoned mines that are up stream of the Navajo Nation. The Gold King Mine and 47 other nearby sites were added to the Superfund list in 2016, which initiates a lengthy and expensive clean-up of mines in this area.