Studying Patterns of Exposure and Disease over Space and Time

Vieira continues to develop methods to overcome challenges in exposure and risk assessment for environmental health research, which requires not only a valid account of exposures but also information on where and when people are exposed. 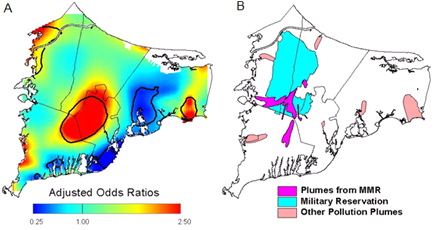 Vieira uses methods such as GAMs and GIS to map how risk factors and exposures contribute to geographic patterns of disease. In one study, Vieira and colleagues found geographic overlap between breast cancer risk and contamination in Cape Cod, Massachusetts. The figure shows how (A) areas with significantly high odds of breast cancer spatially coincide with (B) plumes from the Massachusetts Military Reservation, wastewater treatment facilities, and unlined landfills. (Photo courtesy of Verónica Vieira)

After earning a master’s degree in environmental engineering from Stanford University, Vieira completed her doctorate in environmental health at the Boston University (BU) School of Public Health, working with the BU Superfund Research Program in 2003. She is an associate professor of public health at the University of California, Irvine (UC Irvine), where she directs an active Spatial Epidemiology Research Group. She also maintains a role as project leader and collaborator with the BU SRP.

Vieira’s research with the BU SRP is focused on developing methods for analyzing spatial and temporal patterns in epidemiologic data. She develops and refines methods such as generalized additive models (GAMs), which are used to look at patterns of exposure or disease across populations in a given geographic area. She also works with other researchers to apply these methods to epidemiological datasets, often to determine how exposures to chemical and non-chemical stressors contribute to geographic patterns of disease in children and adults.

Vieira and other BU SRP researchers are currently investigating the impacts that geographic location and chemical mixtures have on attention deficit hyperactivity disorder-related behaviors in children born to mothers living near the New Bedford Harbor Superfund Site. Vieira is also working with colleagues at the Harvard T.H. Chan School of Public Health to examine spatial patterns in breast cancer among participants in the Nurses’ Health Study II cohort and autism spectrum disorder among children of the participants.

Vieira and colleagues have developed a unique R statistical modeling software package called MapGAM, which allows scientists to apply GAMs to their data for examining geographic location or chemical mixtures and to produce maps of their results. She continues to improve the software so it can be used to visualize how the interaction of multiple exposures can change risk patterns 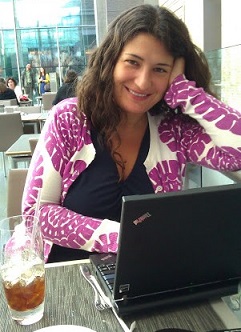 Verónica Vieira, Sc.D., is an environmental epidemiologist who serves dual roles as principal investigator for research projects at UC Irvine and Boston University. Some of her early projects involved geocoding residential addresses and modeling groundwater transport to examine the effects of exposure to water contaminated with tetrachloroethylene and looking at the geographic patterns of cancer and perflurooctanoic acid exposure among residents living near a Teflon-manufacturing plant. (Photo courtesy of Verónica Vieira)

“This package is starting to get picked up by researchers nationally and internationally,” Vieira stated. “It’s been really exciting to see how researchers from France, Italy, Denmark, and China apply MapGAM to their datasets.”

MapGAM is also expanding to other fields where it is being used to examine how demographics and socioeconomics impact disease risk. Vieira has been working with researchers from the UC Irvine Chao Family Comprehensive Cancer Center to assess patterns of survival for ovarian cancer and how geographic location presents a barrier to adequate health care access and treatment.

Infant morbidities, or diseases, such as bronchiolitis and ear infections, are major public health concerns — these illnesses may have serious long-term consequences for affected infants and also present a substantial economic burden in related health care costs. Vieira is collaborating with researchers from Emory University, the BU School of Public Health, and UC Irvine to examine how spatial and temporal variation of particulate matter less than 2.5 microns in diameter (PM2.5) is associated with infant bronchiolitis and ear infection within Massachusetts.

Vieira and colleagues are integrating modeled PM2.5 concentrations based on data from ground air monitors and remote sensing satellites with longitudinal birth data from the Pregnancy to Early Life Longitudinal (PELL) Data System. The PELL Data System is a collaborative project between the Massachusetts Department of Public Health, the BU School of Public Health, and the Centers for Disease Control and Prevention that links birth cohort data with other datasets, including information on emergency department visits and hospitalizations, as well as birth defects. Vieira mentioned that data from the remote sensing satellites enable them to estimate PM2.5 exposures in geographic areas at enhanced resolutions.

The researchers are using GAMs to examine the spatial-temporal patterns of infant bronchiolitis and ear infection in relation to PM2.5 exposure while adjusting for other known risk factors. Strengths of this study include innovative methods that reduce exposure misclassification and minimize bias — common issues faced in traditional epidemiologic analyses. The study includes over 20,000 cases and has power to detect effects of short- and long-term PM2.5 exposures and to identify particularly vulnerable subpopulations, including infants born prematurely or with pre-existing respiratory or cardiac conditions.

Vieira also works to train the next generation of environmental health scientists on methods of studying patterns of exposure and disease. For example, her doctoral student Mariam Girguis presented preliminary research at the 2015 International Society for Environmental Epidemiology meeting, which indicate higher risk of clinical encounters for infant bronchiolitis the day after PM2.5 exposure. The results of this study will provide important and new information on infant bronchiolitis and otitis media, two outcomes for which there is increasing prevalence in the vulnerable infant population.