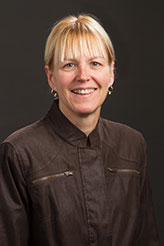 NIEHS grantee Joann B. Sweasy, Ph.D., vice chair for basic research in therapeutic radiology at the Yale School of Medicine, is internationally recognized for her expertise in DNA repair and cancer biology. Her surprising discovery of a link between a DNA repair gene variant and lupus led to the development of a mouse model for lupus that could help researchers understand how environmental factors affect risk for the disease.

DNA is susceptible to damage by various physical or chemical agents, and disease can occur when the cell doesn’t properly repair and maintain DNA. Sweasy investigates how variants of DNA repair genes, such as DNA polymerase beta POLB impact genomic stability. Pol β repairs DNA base lesions caused by oxidative stress and other damaging agents.

Early experiments in Sweasy’s lab showed that cultured mouse cells expressing a mutated form of POLB, exhibit cancer-like characteristics. To learn more, Sweasy and colleagues constructed a mouse model with a POLB gene variant that synthesizes DNA at a rate 30-40 times slower than normal. Surprisingly, the POLB mutant mice did not develop cancer; instead, they showed symptoms resembling lupus.

Regular observations of the POLB mutant mice over time revealed that they had significantly more skin lesions on their necks, backs, and ears compared to the normal mice – these were immediately confirmed to be symptoms of lupus-like dermatitis by Yale pathologists and lupus experts. The mice also exhibited other hallmark symptoms of lupus, including increased levels of antinuclear antibodies in the blood, swollen lymph nodes, and renal disease. “It was extremely important to document these findings thoroughly, because we expected the mice to get cancer – we were very surprised by these results,” Sweasy explains.

Lupus is an autoimmune disease that causes widespread inflammation and tissue damage due to the immune system’s production of antibodies against bodily cells. There is currently no cure, and while its causes are largely unknown, scientists suspect that genetic, environmental, and hormonal factors may be involved.

In people, there is evidence of lupus being associated with environmental exposures that cause DNA damage, such as solvents in paints or dyes, and ultraviolet light. These exposures lead to damage that is processed by DNA repair mechanisms. Research into understanding the nature and environmental origins of lupus has been hampered by lack of an animal model accurately reproducing human symptoms.

“Lupus is a devastating disease, and the quality of life for people with lupus is greatly compromised,” Sweasy says. “Understanding the causes and determining genetic predispositions for lupus would be potentially insightful for identifying better treatments or even a cure for the disease.”

Moving forward, Sweasy and her colleagues continue work to determine the underlying molecular mechanisms responsible for lupus. Future studies using the POLB mouse model could shed light on mechanisms underlying exposures to environmental agents, such as paint solvents and ultraviolet light. Sweasy mentions potential ideas and use of POLB mouse cells to develop high throughput assays to screen similar toxicants that are associated with DNA damage. Some preliminary studies are underway in collaboration with Peter Wipf, Ph.D., (University of Pittsburgh) to determine whether feeding the mice novel, mitochondrial-targeted antioxidants will decrease the severity and increase the latency of lupus. Sweasy also plans to create other genetically modified mouse strains to determine whether there is an association between the timing of DNA repair initiation and the severity or onset of lupus-like symptoms. This would involve mating the POLB mutants with mice from other genetic backgrounds, such as those with compromised initiation of DNA repair.

“There are probably many pathways linked to lupus, and aberrant DNA repair is likely the cause for only a subset of people,” Sweasy explains. She is collaborating with investigators in the UCSF Lupus Clinic and Lupus Initiative Consortium who have expressed interests in further exploring the association between lupus and human genetic variants in DNA repair genes, including POLB. This research consortium offers several unique opportunities to collect and analyze biological samples from people with lupus, which could be used to study gene variants.