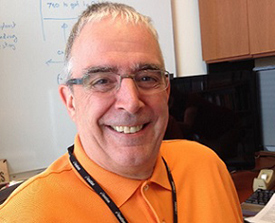 From 2007 to 2011, Trevor Penning, Ph.D., director of the University of Pennsylvania (UPenn) NIEHS Environmental Health Sciences Core Center (EHS Core Center), noticed a drastic rise in hydraulic fracturing, or fracking, across the state of Pennsylvania. Hydraulic fracturing is a method used to extract natural gas and oil from deep rock formations known as shale; it is one part of the broader unconventional natural gas drilling operations (UNGDO) process.

“I felt that in order for the UPenn Core Center to be responsive to the needs of the region, we would need to look at the hydraulic fracturing process from the perspective of its potential public health impact,” said Penning.

The Working Group reviewed the potential public health impacts of UNGDO and made recommendations for future research in a 2014 publication. The review echoed prior recommendations for UNGDO research with one notable difference: the Working Group called for the use of community-based participatory research principles in studies on the environmental and health impacts of UNGDO. They concluded that community engagement will be essential for successfully addressing UNGDO environmental health disparities, understanding public risk perception, and disseminating research findings.

To address this need, Penning spoke at the 2012 NIEHS EHS Core Centers Annual Meeting about the hydraulic fracturing process and its potential public health consequences, indicating the need for the Core Centers to pool their expertise and resources to address this emerging issue. Concurrently, at the EHS Core Center meeting, the Community Outreach and Engagement Core (COEC) teams were discussing the community concerns around UNGDO. Penning’s talk coupled with the COEC sessions sparked the interest of several Core Centers and was the motivation for forming the EHS Core Centers Inter-Center Working Group on Unconventional Natural Gas Drilling Operations (Working Group), which now includes 16 of the 22 NIEHS-funded Core Centers.

According to Penning, NIEHS support of the Working Group’s efforts has helped drive its research agenda forward. “This effort has not just been a partnership between the Core Centers, but a partnership with the Institute as well,” he explained. Using supplemental funds from NIEHS, members of the Working Group are conducting several pilot projects aimed at examining the environmental health impacts of UNGDO. Data from these pilot projects could be used to launch collaborative research projects with a focus on environmental epidemiology in at-risk populations.

An early Working Group inter-center pilot project led by the UPenn and Columbia University EHS Core Centers represents the most comprehensive study to date addressing the potential health impacts of UNGDO. The researchers examined associations between drilling well density and healthcare utilization across three Pennsylvania counties using data from more than 95,000 patient records within 25 different medical categories between 2007 and 2011. During this time period, two of the counties saw large increases in hydraulic fracturing, while the third county — the control population — had no active wells. Closer examination of these data by ZIP code revealed a significantly higher prevalence of cardiac and neurologic inpatient services in areas with either a higher number or density of wells. The research team also found associations between well density and hospitalizations for skin conditions, urological conditions, and cancer. The results were published in July 2015 in the journal PLOS ONE. Moving forward, the researchers will test well water to characterize associations between well density, water quality, and healthcare utilization in Pennsylvania.

As part of another ongoing initiative of the Working Group, members from the UPenn EHS Core Center teamed up with colleagues at the Harvard EHS Core Center to learn about the Harvard World Map (HWM) program. HWM is an open source tool for exploring, visualizing, editing, sharing, and publishing geospatial information. The goal of this cross-training effort was to provide UPenn researchers with the necessary skills to create maps showing where UNGDO liquid and solid waste is disposed (hot spots). “Determining the location of these hot spots, as well as the volume of waste transport and disposal activity, is an important step to understanding the full environmental and health impacts of the UNGDO process,” Penning said. He added that UNGDO waste disposal could have environmental and public health impacts in communities where there are no active wells, so it is important to know where these hot spots are.

Toward a Community-Informed Research Agenda

The Working Group has a strong interest in identifying and responding to community concerns and information needs surrounding the potential health impacts of UNGDO. One of the first COEC collaborative projects was among the University of Rochester; the University of North Carolina, Chapel Hill; and the University of Cincinnati to assess community stakeholders’ understanding of, and desire for, information about potential health impacts of UNGDO. The researchers conducted interviews with community stakeholders in New York, North Carolina, and Ohio — three states where the UNGDO industry was expected to expand rapidly over the next several years. They found that interviewees were concerned about exposures through air and drinking water and about the cumulative, long-term effects on health and quality of life. Other key themes included the importance of transparency in the research process and funding, the need for multiple sources of credible information, and the capacity of government agencies to monitor and enforce protective regulations. A white paper provides an in-depth look at the COECs’ assessment, and an April 2014 publication provides an overview of the study. This collaborative project led to the development of a new project focused on risk perception and risk messaging.

Working Group members from the University of Cincinnati and Oregon State University EHS Core Centers are collaborating to understand better the impacts of hydraulic fracturing on air quality. In planning their pilot study, the researchers worked closely with the citizens of Carroll County, Ohio, which contains a growing number of wells, to understand better their concerns about the potential consequences of hydraulic fracturing. They then worked with community members to set up passive air sampling devices to measure levels of polycyclic aromatic hydrocarbons (PAHs) at residences near active wells. Study participants also were enlisted to wear personal wristband monitors. They found that PAHs were highest at air samplers located closest to active wells and that levels decreased as you moved further away from wells. They also found that PAH levels closest to active wells were above the U.S. Environmental Protection Agency’s (EPA) acceptable risk level. These results suggest that hydraulic fracturing may contribute significantly to PAHs in the air at levels that are hazardous to human health. To facilitate the report back of results to community members, the researchers created a fact sheet summarizing the study, main findings, and what the results mean for concerned citizens.

According to Penning, the Working Group is still very active. Its next major undertaking is to review and provide comments on the EPA’s Draft Assessment on the “Potential Impacts to Drinking Water Resources from Hydraulic Fracturing Activities,” released June 4, 2015. “The review and comment process is very important to make sure that the findings have been reviewed in an unbiased way,” said Penning. “Over the next few months the Working Group will develop comments for EPA’s Science Advisory Board to indicate whether we think their findings are justified, what gaps may exist in the report, and what other steps are needed to move forward.”