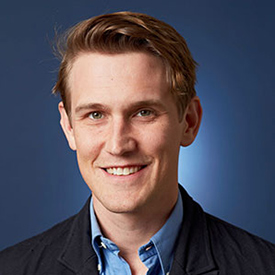 Mercury is neurotoxic, especially in young children. It is found in the environment as a result of energy production, mining, and industrial activities.

As an SRP pre-doctoral trainee, James joined a project led by Catherine Koshland, Ph.D., at the University of California, Berkeley, and Donald Lucas, Ph.D., at Lawrence Berkeley National Laboratory. The researchers were developing a way to use an optical detection technique called surface plasmon resonance to measure the amount of mercury that attaches to a film of gold nanoparticles. James helped move the technology from proof of concept to an optimized sensor with a defined performance by modifying the shape, size, and form of the gold nanoparticles.

From Trainee to CEO

After the university patented the mercury sensing technology, James and Jeff Crosby, Ph.D. (also a former SRP trainee), co-founded Picoyune and received an exclusive license for the technology. A technology transfer supplement from the SRP funded six months of postdoctoral training for James as the start-up was launching.

“At a start-up, it is a very different type of work than what you do as a graduate student, which is about getting good test results for a paper,” says James, CEO of Picoyune. “You can’t just stay focused on the technical aspects; you have to also stay engaged with the business aspects of commercialization. In the first six months, we talked to hundreds of customers to understand the market for which we would be designing the device.”

The technology transfer supplement grant allowed the team to move from a device that sat on a lab bench and required hands-on operation to a self-contained, automated detector that could test efficiently the selectivity and repeatability of the new method. During this process, James obtained the data needed to secure a Phase I SBIR grant from NIEHS.

Picoyune’s prototypes have run continuously for a year, undergoing thousands of tests to make sure they work under various conditions. In fall 2015, James and his team began Phase II of the NIEHS SBIR funding, which provides $1 million in research and development support over two years. By the end of this funding period, they plan to have a fully designed instrument that is ready for manufacturing and sale. 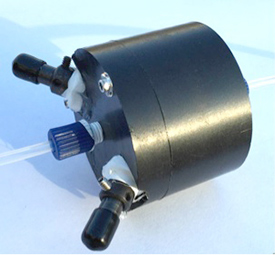 This device contains the innovative detector that uses a film of gold nanoparticles to detect mercury.
(Photo courtesy of Jay James)

“Having the funding to plan a project for two years really changes the scale and quality of work you can do,” he says. “It’s pretty rare for someone at a start-up to do this type of work because many times you won’t have guaranteed funding for two years.”

Picoyune also is busy creating the partnerships it needs to prepare for successful commercialization. They are speaking with established instrument companies with which they might partner and are working with the U.S. Environmental Protection Agency (EPA), which could be a future customer. “We’ve presented to a group of mercury project managers and scientists at EPA, and we’re coordinating with them for our field demonstrations on this SBIR grant,” James says. “We’ll be going to existing EPA Superfund sites and taking measurements with our prototype instruments.”

The company’s short-term goal is to commercialize the portable mercury detector, which is also more resistant to interferences than traditional mercury analysis techniques. The Picoyune team is also looking to the future by making plans to leverage its sensing approach by creating portable detectors that measure other contaminants.

Picoyune is also funded by the National Science Foundation.