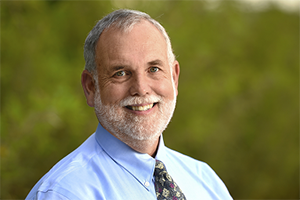 Frank Gilliland, M.D., Ph.D., received his master’s degree in public health, as well as a doctoral degree in environmental epidemiology and occupational medicine from the University of Minnesota. He has directed the NIEHS Southern California Environmental Health Sciences Center since 2007 and the Children’s Health Study since 2006.
(Photo courtesy of Frank Gilliland)

As principal investigator of the Children’s Health Study (CHS) at the University of Southern California, Gilliland is also actively involved in studying the effects of air quality on respiratory health. The CHS, founded in 1992, is focused on investigating the effects of chronic air pollution exposure on children’s health in southern California, and has led to over 280 peer-reviewed publications.

From Physicist to Physician to Environmental Public Health Investigator

Though Gilliland began with a master’s degree in physics from the University of Virginia, he decided that he also would attend medical school there, and received his M.D. in 1977.

Gilliland initially planned to study radiology, but while working as a physician in the U.S. Public Health Commissioned Corps on the Navajo Nation, he made a significant change in the course of his career. While there, he cared for patients and studied lung cancer among non-smoking former uranium miners. This experience sparked his interest to explore further the role of environmental exposures on respiratory health and disease. Of note, for his Ph.D. thesis at the University of Minnesota, Gilliland performed a groundbreaking investigation into the health effects caused by perfluorinated compounds — a class of chemicals now recognized as persistent environmental toxins.

Over the past several decades, Gilliland and colleagues have found that air pollutants, such as nitrogen dioxide, particulate matter (PM), and ozone, have adverse short- and long-term effects on children’s health. “The prenatal and childhood periods are very sensitive stages of development for children when air pollutants have the capacity to impact a broad spectrum of lifelong health effects, including immune dysfunction, obesity, neurodevelopment, cardiovascular, and respiratory health,” Gilliland explains.

In a recent study published in the New England Journal of Medicine (NEJM), the researchers found that the decline of ambient air pollutants (nitrogen dioxide and PM) in southern California is associated with clinically significant improvements in lung-function growth for children ages 11-15. Having followed more than 2,000 children in the CHS, the researchers provided evidence of substantial improvements in child lung function development for the most recent cohort (2007-2011) compared to previous cohorts (1994-1998 and 1997-2001) from the same communities. Measures of child lung function development were obtained annually to assess volume and speed of inhaled and exhaled air. Statistical models were then used to show that declining levels of ambient nitrogen dioxide and PM between 1994 and 2011 were associated with improved child lung function. These associations were observed among boys, girls, and children with and without asthma.

The aforementioned improvements in child lung function are likely due to the implementation of stricter air quality standards and policies over the past few decades in the southern California region. Gilliland and colleagues also published a separate study in the Journal of the Air & Waste Management Association (JA&WMA), which discussed policies that may have contributed to the reductions in ambient air pollutants, specifically nitrogen dioxide and PM. Gilliland states that California has been a major leader in clean air approaches and regulations, having recognized the impacts of emissions from multiple sources, including seaports, vehicles, and diesel trucks. “Our job is not done — air pollution levels are still high and adverse effects continue to occur in children,” says Gilliland. “To protect children’s health, further air quality improvements will be needed.”

Moving forward, Gilliland and colleagues plan to continue following these cohorts to determine whether children experience increased susceptibility to lung disease when they reach adulthood. They are also hopeful about continuing to explore traffic-related air pollution near roadways, which may also significantly affect various health outcomes. “These complex exposures are largely unregulated due to gaps in the scientific knowledge base,” Gilliland explains.

Understanding genetic susceptibility is also essential to protect children’s health. Gilliland’s lab and other scientists have identified several genes potentially linked to children’s susceptibility to reduced lung function and disease later in life. Exploring how epigenetic mechanisms mediate the effects of exposures to complex mixtures of air pollutants is another hot topic. “Studying these types of mechanisms will likely provide insights of clinical importance,” says Gilliland.