Bevin Engelward, Sc.D., is deputy director of the MIT Center for Environmental Health Sciences. She says that CometChip evolved as part of a team effort and extends credit to the center’s research focus and her colleagues there.

A device called the CometChip greatly improves the quality and speed of DNA repair analysis. Designed by NIEHS grantee Bevin Engelward, Sc.D., from the Massachusetts Institute of Technology (MIT), this device allows the discovery of subtle differences in DNA repair capacity among individuals, as well as advances in basic research. It soon will be commercially available from biotechnology company Trevigen.

Environmental health scientists study DNA repair because damage from environmental contaminants can lead to gene mutations that cause disease. It is important to understand how cellular mechanisms throughout the body can mend DNA.

Engelward, who is deputy director of the NIEHS-funded MIT Center for Environmental Health Sciences, collaborated with MIT’s Sangeeta Bhatia, M.D., Ph.D., to develop the CometChip as a high-throughput platform for performing the traditional comet assay used to measure DNA damage.

The CometChip uses a 96-well platform to reduce greatly variation in readings between samples, thus increasing the comet assay’s sensitivity compared to the traditional approach. The results from the assay performed in each of the 96 wells can be captured with just a few photos, which greatly reduces the time spent on analysis and provides robust data (Read more: How it Works).

Although Engelward and colleagues initially developed the CometChip as a tool for their own research, they realized that it had great potential for commercialization. “It is a very difficult step to go from a lab version of a product to a commercial version,” Engelward says. “Trevigen was willing to do the work, so we applied for and received an SBIR grant from NIEHS. It gave us the money that we needed to translate what was developed in the laboratory into something generally useful to many people.”

Engelward and her research team have been using the CometChip to study the natural variability in DNA repair capability among people. This knowledge one day could be used to develop a routine test that would reveal whether a person is particularly susceptible to a certain type of environmental exposure because of lower DNA repair capacity. They were inspired by Leona Samson’s research group at MIT, which shared a set of 24 Coriell cell lines from ethnically diverse individuals with them. Analyzing DNA repair in these cell lines required over 1,000 samples. 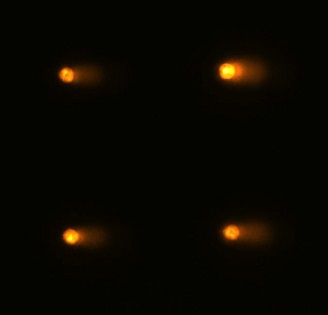 In each well of the CometChip, damaged DNA migrates across the gel, taking on the shape of a comet. The longer, brighter tails indicate more DNA damage that the cell could not repair. (Credit: David Weingeist and David Wood)

“Even if we could analyze 1,000 samples using the traditional approach, the noise due to variability between samples and the variability between experiments would be so high that there would be no way to detect the subtle differences in DNA repair that we could see with the CometChip,” Engelward says.

The CometChip is also useful for screening compounds to identify ones that damage DNA or are genotoxic. “There are a thousand new chemicals introduced every year, and it’s not inconceivable to screen all of those using the CometChip to see which are genotoxic,” she says.

In one screening application, Engelward collaborated with Harvard University’s Philip Demokritou, Ph.D., to identify whether certain classes of nanoparticles are genotoxic. “What is really exciting is that gaining this information also gives us the ability to modify those nanoparticles to render them safe,” Engelward explains.

Engelward has partnered with Integrated Laboratory Systems to develop a modified version of the CometChip that can be used to detect chemicals that become genotoxic after they are processed in the body. “When screening for genotoxicity, one of the difficulties is that some of the chemicals are harmless but then when they are metabolized by the liver they become genotoxic,” she says.

Engelward’s lab also is working to combine the CometChip technology with an independent method for assessing DNA repair developed in Samson’s laboratory. Combining these approaches will make an even more powerful DNA repair analysis system.

Engelward says that many students and postdoctoral fellows from both the Engelward and Bhatia labs contributed to the project. David K. Wood, David Weingeist, and Jing Ge all played key roles in the CometChip’s development.

To make a CometChip, the researchers use photolithography to create a stamp with a field of pegs, with each peg about the diameter of a single cell. Pressing the stamp into agarose gel and removing it leaves behind a field of 96 microwells. Then a mixture of cells is placed above the microwells, which drop into the wells by gravity. Excess cells are washed away.

At this point, the Comet assay is run with the cells exposed to a challenge, such as an environmental toxicant, and given a chance to repair any DNA damage that occurs. To find out whether damaged DNA remains in cells, the researchers lyse the cells (break them), perform a separation technique called electrophoresis, and then stain the DNA for analysis. If DNA is undamaged, it remains in a clear spheroid. If the DNA is damaged, fragments and loops of DNA will migrate through the agarose gel during electrophoresis, leaving the appearance of a tail. Visual inspection is possible because undamaged DNA is too large to move freely, but the small fragments of damaged DNA move easily.