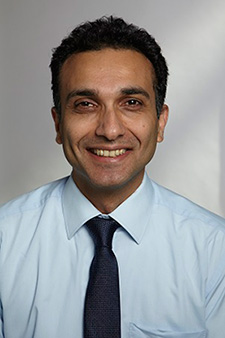 Great challenges persist in valid assessment of exposures that occur during the prenatal period and early childhood. For example, chemicals measured in a pregnant woman’s blood do not always accurately reflect fetal exposure. Environmental epidemiologist and dentist Manish Arora, Ph.D., from the Icahn School of Medicine at Mount Sinai, recognizes the promising value of using teeth as exposure biomarkers to overcome these challenges. He leads investigations that integrate advanced exposure biology methods and environmental epidemiology to understand how exposures that occur during development impact health trajectories later in life.

“Teeth begin developing prenatally and form rings or layers, which are very similar to rings of a tree,” Arora explained. “I consider teeth to be complex organs that accumulate information on environmental exposures and our response to various stressors during development – in a manner of speaking, they are a biologic hard drive that records information while the tooth is forming. I want to take advantage of this hard drive, and figure out ways to read the rich information stored in it for environmental studies.”

As a child growing up in secluded regions of India and Africa, Arora witnessed first-hand the importance of health care access for public health. Furthermore, his childhood experiences in these areas motivated him to pursue a career in dentistry and primed his interest in environmental health. “When my family and I lived in a village in Africa, on a monthly basis, trucks would come in spraying pesticides,” Arora recalled. “Even during these regular intervals of spraying, children would continue to play outside.”

Years later, during his time as a dentist in private practice, Arora learned about the harmful effects of the pesticide that those trucks were spraying: dichlorodiphenyltrichloroethane (DDT). Realizing a significant change in the course of his career was needed, he obtained his master’s degree in public health and his Ph.D. at the University of Sydney in Australia. While there, Arora began exploring the connection between teeth and environmental health and studied an eclectic mix of environmental health, analytical chemistry, nuclear beam methods, and oral pathology. This experience and the inspiration gained from the seminal work of scientists such as Michael Rabinowitz, Ph.D., and Herbert Needleman, M.D., led him to refine previously identified methods that could be used to uncover biomarkers of exposure in teeth.

Arora and his collaborators analyze tooth matrices and reconstruct the timing of developmental exposures to harmful chemicals or essential nutrients using an innovative laser ablation method that they developed. The method involves a combination of techniques that are used to analyze spatially the distance between tooth growth rings and to detect concentrations of organic compounds in samples.

Arora and his team have reconstructed early-life exposures to metal toxicants by analyzing shed deciduous (baby) teeth collected from different children’s cohorts in the U.S. and Mexico. For example, in a study sample of children from the Center for the Health Assessment of Mothers and Children of Salinas (CHAMACOS) cohort, Arora and colleagues mapped barium variations in teeth using the laser ablation method. By comparing these variations to diet histories, they determined that the levels of barium in teeth accurately represented transitions from exclusive breastfeeding to formula in the children. In a study sample of children from the Early Life Exposure in Mexico to Environmental Toxicants (ELEMENT) cohort, Arora’s team determined that lead levels in teeth corresponded with the timing and intensity of prenatal lead exposure. These studies could provide insight into how developmental exposures to metal toxicants lead to adverse neurodevelopmental or neurodegenerative outcomes in children and adults.

In December 2014, Arora received the first ever NIEHS Young Innovator Award; the $1.5 million grant will fund his efforts to study the impact of environmental toxins and stress on fetal development. “Studying chemicals in isolation is not enough to understand the effects of cumulative exposures,” Arora explained. Moving forward, Arora and colleagues propose that tooth matrix biomarkers can be used to analyze the timing and composition of dynamic, multi-class chemical exposures during development. He also plans to use these biomarkers to reconstruct biological pathways that link exposures and health outcomes. This work will involve using a range of different nuclear beam and mass spectrometry technologies to perform high-throughput, untargeted analysis of tooth matrices. These methods are capable of identifying narrow windows of exposure to thousands of chemicals throughout developmental windows of susceptibility.