PECASE Awardee Works to Understand the Environment’s Role in Autism

Young-Shin Kim, Ph.D., wants to understand why autism prevalence is increasing by studying the role of environmental risks and gene-environment interactions. She received the prestigious Presidential Early Career Award for Scientists and Engineers (PECASE) for her groundbreaking autism research and commitment to community service. PECASE is the highest honor the United States government gives to early-career scientists and engineers. 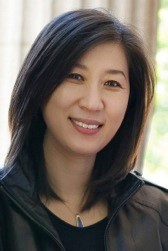 “It is a great honor to be chosen for this award – for this acknowledgement that my research is changing the field and also contributing to the community,” said Kim, an associate professor at Yale University and NIEHS grantee. “I want my work to benefit the community right now, not just in the future. I try hard to educate the community about autism, help teachers understand the importance of identifying children with autism, and find ways to provide services to children experiencing any type of difficulties.”

On April 14, 2014 Kim was recognized for her PECASE award during a White House ceremony. NIEHS nominated her for the award, which recognizes pursuit of research at the frontiers of science and technology and commitment to community service as demonstrated through scientific leadership, public education, or community outreach. Kim credits the support she received from all her mentors for helping her to advance her career.

In 2011, Kim published a study in which her research team directly screened all 7- to 12-year-old children (~55,000) in a South Korean community for autism. She found that 1 in 38 children had autism, much higher than the estimates of 1 in 68 from the U.S. Centers for Disease Control and Prevention (CDC). She explains that most studies use clinics and special education programs to identify children with autism because scientists assume that autism is severe enough for children to need services. Kim’s results revealed that those studies were missing children with autism who were high functioning and didn’t use services.

The most recent CDC estimates for the number of children with autism are more than double the 1 in 150 prevalence for 2002, and scientists aren’t sure why these numbers keep rising. Kim explains that looking at prevalence, or the number of children with autism at a given time, isn’t the best approach to determine if more children are really developing autism. “Prevalence can change because of increased public awareness, better screening, study design, and other reasons,” Kim said. “The way to understand if more children are developing autism is to use a prospective study to look at incidence.” A prospective incidence study looks at new cases in a healthy population over time.

In 2012, she received NIEHS funding to conduct a prospective incidence study in South Korea. Every year for five years, Kim’s research team is directly screening all 7 year olds (~ 7000) born in Goyang City, South Korea. Children confirmed to have autism along with their families are invited to join the study and to donate blood samples. Screening all the children born in this city, even if they have moved, removes any influence from better screening or awareness in a certain area and ensures a truly representative sample of children with autism. For comparison, the researchers are also enrolling children who match the children with autism in terms of sex and intelligence quotient, or IQ.

The researchers will use the blood samples to identify genes and exposures that are involved in autism. They will look at a wide variety of preconception and prenatal factors, including exposures parents encounter at work, the age of the father, alcohol and tobacco use, medications, and exposures to environmental contaminants such as pesticides. “Because the influence of genetic factors is unlikely to change from year to year, if we find an increase in cases of autism, then it is strong evidence that environmental factors are at work,” Kim said.

As a next step, Kim plans to use her PECASE award for a pilot study that will follow the children in the 2011 study into adulthood. She wants to better understand the differences between the high-functioning children with autism and those who used services and whether environmental factors can predict outcomes in these two groups.