It could warn the wearer about the presence of substances that might trigger an asthma attack. Nongjian (NJ) Tao, Ph.D

Although various wearable monitors are under development, environmental health studies typically use air pollution data from stationary monitoring stations. These averaged readings don’t truly represent how, where, or for how long a person is exposed to contaminants, information that is important for discovering how environmental exposures interact with a person’s genes to affect health. 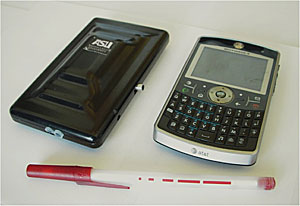 Tao, a professor of electrical engineering at the Arizona State University in Tempe, has been developing the monitor for ten years. Today’s version is a wearable, low-cost device that detects hydrocarbons, volatile organic compounds, and acid vapors. It wirelessly transmits location, time, and exposure data to a smartphone running an application that stores, displays, and transfers the data to researchers.

“The cell phone works well because it is fairly low cost, has high computational power, and has GPS capability. An additional benefit is that it is very user-friendly,” says Tao, who is also the director of the university’s Center for Bioelectronics and Biosensors.

Tao and his research team have field-tested the wearable monitor in various environments. It successfully measured the volatile organic compounds benzene, toluene, ethylbenzene, and xylene (BTEX) at various Phoenix locations, including a gas station, airport, and a school. The device was also taken into the Gulf of Mexico after the Deepwater Horizon oil spill, revealing that air pollution varied greatly by location and providing more detailed information than the monitoring station’s averaged results for the area.

The researchers used the monitor to measure traffic-related hydrocarbon levels around key roads in Tempe, Ariz.

They also measured hydrocarbons in the Gulf of Mexico after the Deepwater Horizon oil spill.

Tao’s research team is also collaborating with a research team led by NIEHS grantee Rob McConnell, M.D, at the University of Southern California. McConnell studies the role of air pollution in early-life asthma. The two teams are working together to correlate the device’s measurements of volatile organic compounds with other traffic-related pollutants and to validate the device at various Los Angeles locations by comparing its readings with gold standard equipment and methods.

Tao is working to add even more functionality to the wearable monitor, including the capability to detect other components of air pollution such as particles, nitric oxide, nitrogen dioxide, and ozone.

“The device delivers very accurate and reliable temporal and spatial data as well as accurate concentrations for exposures,” Tao says. “Researchers now have to figure out the best ways to pull useful information from all this data.” Once researchers better understand how to use the personal data, the wearable sensor could have prevention applications. For example, it could warn the wearer about the presence of substances that might trigger an asthma attack.