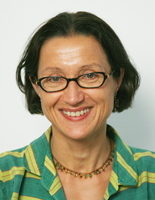 Ritz says that having a team capable of bridging population studies and applied experiments was essential for her research on pesticide exposure and Parkinson’s disease. She also notes the importance of cross-disciplinary work. “Many of my ideas for hypotheses have come from other fields,” she says.
(Photo courtesy of Beate Ritz)

NIEHS grantee Beate Ritz, M.D., Ph.D., uses geographic information systems (GIS) technology to study links between pesticide exposure and risk for Parkinson’s disease. Her research is uncovering important gene-environment interactions - that is, the ways in which genetic background and environmental exposures can influence a person’s susceptibility to disease.

Understanding why some people who are exposed to pesticides don't get Parkinson's disease could help us to understand how to boost protective biological processes and to identify preventive actions. Beate Ritz, M.D., Ph.D.

“Understanding why some people who are exposed to pesticides don't get Parkinson's disease could help us to understand how to boost protective biological processes and to identify preventive actions,” says Ritz, who co-directs the University of California, Los Angeles (UCLA) Center for Gene-Environment Studies in Parkinson's Disease. “It could also help us find treatments for those at risk and help identify stressors that come together to make people more vulnerable.”

Population studies involving pesticide exposures have traditionally relied on study participants to self-report their pesticide use, a method fraught with recall-related issues. For a more quantitative picture of exposure, Ritz and her colleagues developed a way to integrate data collected during 30 years of state-mandated pesticide reporting in California using a GIS-based approach. The GIS method created detailed maps of pesticide exposure for each person, and adding a time component provided exposure information for the home and workplace over much of a person’s life.

They used this method to examine pesticide use and Parkinson’s disease in California’s Central Valley, a rural region where people live close to fields with extensive agricultural pesticide application. In one study, the researchers estimated pesticide exposure from well water with the GIS tool. They found that possible well water contamination with high levels of methomyl, chlorpyrifos, and propargite pesticides resulted in an approximately 70 to 90% increase in risk of Parkinson’s disease compared with residents that were not exposed to these contaminants in well water. 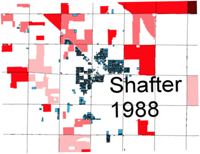 In another study, they estimated exposure to airborne ziram, maneb, and paraquat pesticides at workplaces and residences. Exposure to the combination of these three pesticides led to a greater risk of Parkinson’s disease than each alone, with people exposed both at work and at home having the highest risk.

The researchers took the pesticide exposure stories unveiled by the GIS method a step farther and looked for variations in gene sequences that make people more susceptible to Parkinson’s disease when exposed to pesticides. 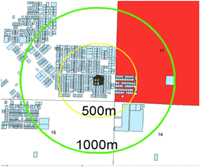 “The challenge of identifying gene-environment interactions is to measure the environmental exposures reliably and to find the right genes to study,” says Ritz, who is a professor and vice chair of the UCLA Epidemiology Department. “Many studies today have a hard time assessing exposures, and you have to know something about the biology to know what genes to examine.”

So far, Ritz’s research has shown that increases in Parkinson’s disease risk after pesticide exposure are associated with variations in the paraoxonase 1 (PON1) and dopamine transporter (DAT) genes. Paraoxonase 1 breaks down organophosphate pesticides that enter the body. DAT plays a central role in neurotransmission, and mutations in the DAT gene might be involved in Parkinson’s disease.