Children and infants are particularly vulnerable to pollution and other environmental factors that may cause serious health problems. The Superfund Research Program (SRP) funds a range of research grantees to determine how children are exposed to environmental contaminants and what makes them uniquely vulnerable to their effects. Examples summarized here show how the SRP has been at the forefront of children's environmental health research, which has led to new programs and initiatives to protect children's health.

SRP grantees have made important discoveries about how children come in contact with hazardous chemicals, helping to identify the original sources of contaminants and subsequently encourage the best ways to protect children's health. Grantee research explains how children may be exposed to higher levels of arsenic, polychlorinated biphenyls (PCBs), and other chemicals.

The Dartmouth SRP Center's Arsenic and You website informs viewers about arsenic in water, rice, and other sources.
(Photo courtesy of Arsenic and You)

Researchers at the Dartmouth College SRP Center developed innovative methods to measure arsenic in food and surveyed rice-based products, identifying exceedingly high levels of arsenic in brown rice syrup, a substitute for corn syrup in many foods, including toddler formula. Based on this information, they evaluated whether dietary arsenic contributed to arsenic exposure in U.S. children. Using National Health and Nutrition Examination Survey (NHANES) data, the team reported for the first time that rice consumption may be a source of arsenic exposure for children.

Children living near an inactive mine tailings and smelter site were exposed to higher levels of arsenic than the general population, according to research from the University of Arizona SRP Center. The team reported that tap water and soil were important sources of arsenic. Because the arsenic in water was largely naturally occurring from geologic sources, the researchers highlighted the importance of considering different pathways and routes of exposure. 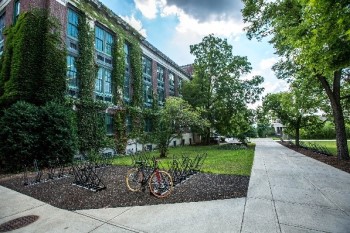 The University of Iowa SRP Center is focused on identifying sources of PCBs, how people are exposed, and the potential health consequences. PCBs are classified as human carcinogens and have been banned from use in the U.S. since 1979 but are still found in water, soil, sediment, and animal and plant tissue. Following a group of children and their mothers, the researchers were the first to measure PCBs and their major breakdown products in two generations and reported that short-term exposures to PCBs may be a significant component of what is measured in humans. They also identified several risk factors associated with higher body burden of PCBs in children, including older maternal age and longer breastfeeding. The team further examined PCBs in indoor and outdoor air from rural and urban schools and reported that some children's exposure to PCB through inhalation may be equal to or higher than through diet.

In addition to identifying how children may be exposed to potentially hazardous chemicals, SRP Centers across the country have uncovered important information about how these chemicals may harm children's health. Among these effects, grantees have identified reductions in intellectual function and impaired neurological development, elevated blood pressure, and altered immune response. Researchers at the Columbia University SRP Center were the first to identify that exposure to manganese in drinking water reduced intellectual function in children in Bangladesh and that certain factors, particularly poor prenatal growth, can worsen those effects. They found similar reduced intellectual function in Bangladeshi children and reduced IQ in U.S. children exposed to arsenic in drinking water. Their research has helped identify solutions to better protect children's health. For example, understanding the role of folate, B vitamins, and other nutritional factors helped inform the ongoing Arsenic and B-vitamins in Children study, which evaluates whether folate and B12 supplements can help the body break down and eliminate arsenic. They also found that switching to deeper wells with lower arsenic content reduced arsenic in blood and urine and improved working memory scores in children over a two-year period.

The Dartmouth SRP Center discovered connections between low prenatal arsenic exposure and adverse birth outcomes and between prenatal lead exposure and elevated blood pressure in children. They also reported a link between low levels of arsenic in the diet and impaired neurological and psychological development in children in Spain.

Researchers at the University of Arizona SRP Center demonstrated for the first time that arsenic from residential soil, tap water, and house dust is associated with decreased club cell secretory proteins, a marker of decreased lung function in children.

Key findings from the University of Rhode Island SRP Center revealed that early-life exposures to per- and polyfluoroalkyl substances (PFAS) may alter concentrations of hormones important in energy metabolism, inflammation, and other molecular pathways involved in obesity. Building on decades of previous research, the team is exploring the link between early-life exposure to PFAS and adverse health outcomes in children, including altered immune response and obesity and the underlying mechanisms involved using studies in mice.

The Boston University SRP Center has made important discoveries linking exposure to harmful chemicals with increased likelihood of attention-deficit/hyperactivity disorder (ADHD) diagnoses in children. Using NHANES data, they found PFAS exposure increased the odds of ADHD diagnosis. Similarly, children living near New Bedford Harbor, Massachusetts, who frequently ate fish containing mercury were more likely to be diagnosed with ADHD. They also used spatial analysis to link residence near a PCB-contaminated site with increased ADHD-related behaviors. Their work has made many other interesting connections, including an association between prenatal solvent exposure and increased likelihood of using drugs and alcohol as a teenager.

Leveraging SRP Findings in the Field of Children's Environmental Health 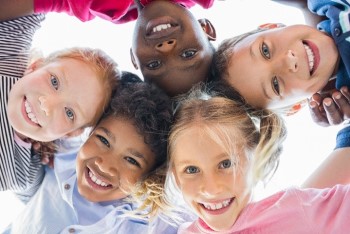 Researchers at the University of California, Berkeley SRP Center began studying the role of harmful exposures in childhood leukemia back in 1995. In addition to important discoveries, such as linking pre-conception, in utero, and early-life exposure to benzene with childhood leukemia, they established the first outreach core focused on children's health. Called the Children's Environmental Health Network, their focus on increasing awareness of environmental health problems in children had ripple effects at the national level, including an amendment to the U.S. Environmental Protection Agency cancer guidelines to include additional safety factors for children.

Researchers at the Northeastern University SRP Center leveraged their cohort of pregnant women in Puerto Rico and partnerships within the community to establish an NIEHS center focused on the health and development of infants and children born in the cohort. When the Zika virus was confirmed in Puerto Rico in 2016, the team was able to hit the ground running to share information with the community about Zika prevention. Their existing infrastructure and relationships made them uniquely situated to investigate the reproductive outcomes of Zika as the first established site for the NIH-funded Zika in Infants and Pregnancy Study. 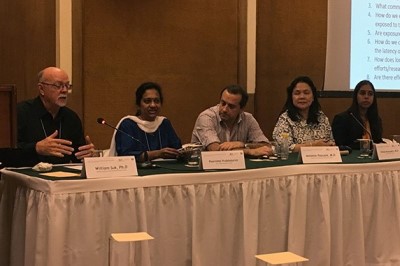 SRP Director Bill Suk, Ph.D., M.P.H., left, was part of a panel at the 2017 Pacific Basin Consortium meeting on strategies to reduce e-waste exposure. Panelists found commonalities among sites that may help with sharing solutions to protect health.
(Photo courtesy of Brittany Trottier)

SRP's transdisciplinary approach to understanding and breaking the link between harmful exposures and disease serves as a model for advancing children's environmental health research globally, particularly in low- and middle-income countries, which carry a disproportionate burden of environmentally related disease. The SRP co-led efforts to coordinate international, regional, and local initiatives to protect children's health, including through workshops at the Pacific Basin Consortium meetings in 2017 and 2019. These workshops highlighted unique risks associated with specific environments and why children are more vulnerable to exposures, while simultaneously growing the international children's environmental health network.