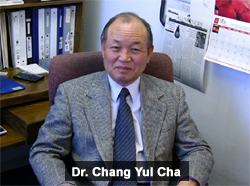 Dr. Chang Yul Cha, President of the Cha Corporation, has been invited to participate in the National Institutes of Health Commercialization Assistance Program (NIH-CAP). The NIH-CAP is designed to help some of the nation's most promising life science small companies develop their commercial business and transition their SBIR-developed products into the marketplace. Dr. Cha developed his microwave technology under the National Institute of Environmental Health Sciences Small Business Innovation Research (SBIR) Phase I and Phase II grants.

During Phase I, Dr. Cha constructed a field-ready prototype microwave reactor system and successfully operated it for more than two months at the former McClellan Air Force Base in Sacramento, California. This demonstration showed that microwave technology can be a cost-effective solution for recovering chemicals from soil vapor produced from Superfund Site remediation operations. These field-testing results strongly indicate that microwave regeneration restores the working adsorption capacity of carbon and that the hydrocarbons adsorbed onto carbon in each adsorption cycle are recovered during successive microwave regenerations. 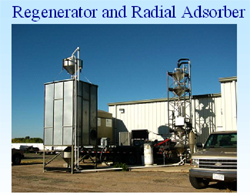 The objective of Dr. Cha's SBIR Phase II work is to build a commercial-scale portable microwave system that is capable of regenerating 50-kg/hr of saturated carbon. This process is capable of recovering solvents and other chemicals desorbed during regeneration. The 50-kg/hr microwave mobile unit was constructed and operated for two weeks at the former McClellan AFB in May 2006. The mobile unit was transported back to CHA Corporation laboratory and set up with a 2000 CFM carbon adsorption unit in October 2006. The mobile unit combined with the carbon adsorber is being operated to perform material balance experiments until the end of January 2007. The project will demonstrate the cost benefit and environmental advantages of the microwave technology. The microwave technology regenerates saturated carbon onsite and recovers various chemicals generated from Superfund Site remediation and also recovers perchloroethylene (PERC) in the air vented from dry cleaning facilities. The results obtained from this project will be used to show that microwave technology is an economic means of recovering PERC for reuse and for preventing the emission of carcinogenic air contaminants. The 50-kg/hr mobile microwave unit will be operated at one medium size dry cleaning facility to recover and recycle PERC in 2007.

The CAP will run from September 2006 until June 2007. In which time Dr. Cha will receive individualized assistance toward accomplishing the following NIH-CAP goals: