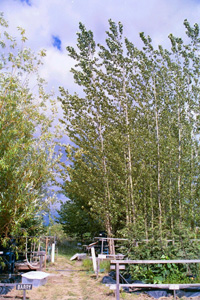 Phytoremediation is an innovative technology that uses fast-growing plants in engineered systems to degrade, extract, contain, or immobilize contaminants from soil or water. It is suitable for a variety of contaminants and conditions, and is an easy-to-maintain, cost-effective means to reduce both the amount and toxicity of pollutants. Phytoremediation preserves the state of the environment, is aesthetically pleasing, is solar-energy driven, can restore habitat for wildlife, and can clean up contamination on-site rather than sealing it in place or transporting the contaminated materials to another site.

Drs. Milton Gordon and Lee Newman at the University of Washington SRP have applied plant physiology, agronomy, microbiology, hydrogeology, and engineering to design remediation strategies for sites where the groundwater has been contaminated with organic solvents, such as trichloroethene (trichloroethylene, TCE). These compounds are toxic, chemically unreactive, heavy, slightly soluble in water, and soluble in most other organic solvents, and tend to rapidly move through the soil and into groundwater. Conventional remediation technologies for these compounds are expensive and time consuming, and may result in the formation of toxic by-products. 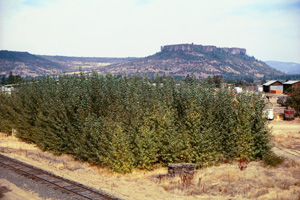 This research has had, and will continue to have, significant economic and public health impacts. Reduction of contaminant levels in soil, sediment, and water will result in decreased human exposure, and improvements in environmental and human health. Currently, the United States spends more than $5 billion per year to clean up organic pollutants. Dr. Gordon estimates that up to half of organic pollutants could be cleaned up using phytoremediation at a cost of only 25 - 30% of standard methods.

Based on their research, Drs. Gordon and Newman successfully demonstrated the effectiveness of their phytoremediation systems under a variety of conditions. 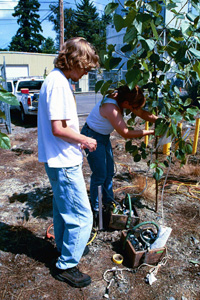 In addition to field-scale trials and applications, these researchers are working to increase the catabolic activity of plants against trichloroethylene and other halogenated aliphatic hydrocarbons. Their goal is to develop transgenic plants capable of significantly higher rates of metabolism of specific contaminants. By introducing a mammalian gene (cytochrome P450) into tobacco plants, they have engineered plants with profoundly increased rates of TCE metabolism. The gene raises enzyme levels to such an extent that the plants removed approximately 600 times the amount of the contaminant as non-transformed plants. Drs. Gordon and Newman are also exploring the potential of using gene sequence information to identify plant P450s for incorporation of other species to increase levels and rates of TCE metabolism. Use of a plant-derived P450 will likely increase public acceptance.

It is important to note that all SRP-funded research on transgenic plants is in laboratory or greenhouse stages. No transgenic plants have been introduced into the environment. SRP will ensure that all proper prior approvals are obtained and all appropriate procedures are in place before any SRP-funded field trials are conducted with genetically modified plants.

In a paper published in the "Proceedings of the National Academy of Sciences" (October 23, 2007), Drs. Stuart Strand and Sharon Doty report their research that focuses on the transformation of the hybrid poplar with a vector containing the rabbit cytochrome P450 2E1, which is a key enzyme in the metabolism of a variety of halogenated compounds. The resulting plants over-express cytochrome P450 2E1.

In laboratory studies, where the apical stem cuttings were exposed to TCE, scientists found that CYP2E1-containing transgenic cuttings had average rates of TCE metabolism nearly 45-fold greater than control cuttings. Two of the CYP2E1 transgenic lines had TCE metabolism rates that were more than 100-fold higher than the controls. The transgenic cuttings grew normally and did not display any adverse reaction to the TCE or its metabolites. 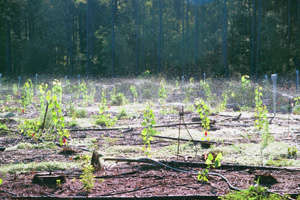 Drs. Strand and Doty then conducted studies to determine if the increased metabolism of TCE in the poplar cuttings led to increased uptake from solution and/or air. They found that while control cuttings removed <3% of the TCE from hydroponic solution, the CYP2E1 transgenics removed 51% to 91%. When exposed to contaminants in the air, the transgenic plants also demonstrated increased uptake. The CYP2E1 plants removed 79% of the TCE from the air, while control plants did not show any statistically significant uptake of TCE. In two weeks, the control plants removed an average of only 13% of benzene from air, while two CYP2E1 plant lines removed 36% and 46%.

The SRP researchers believe that this work represents the first development of transgenic trees for increased removal of a broad range of serious environmental pollutants from water and air. Additional studies are needed to verify efficacy under field conditions and to ensure that plant tissues do not cause unacceptable impacts on non-target organisms.