Clay is well-known for its strong sorptive capabilities – however, clay is also relatively impermeable once it becomes wet. Studies led by Dr. Timothy Phillips at the Texas A&M SRP have shown that heat-treated clays can be chemically amended to increase their sorptive properties. In addition, Dr. Phillips found that by attaching these clay particles to granulated activated carbon (GAC) or sand, a Claypac material is produced that has both the sorptive properties of the clay and the water permeability of sand or carbon. 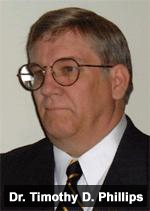 Researchers in Dr. Phillips' laboratory use molecular modeling techniques to study and design chemically diverse materials for the sorption and detoxification of hazardous compounds. To develop a Claypac tailored for a specific target chemical, Dr. Phillips first characterizes the sorption of the target chemical onto the surfaces of various clay and zeolitic minerals in order to define the structural and functional characteristics which maximize the sorption process. The researchers then identify the combination of modified clay, bonding agent and substrate matrix needed to form a Claypac media with optimal particle size, water permeability and sorptive properties. Claypacs are first tested in laboratory bench-scale experiments, followed by scaled-up field studies to evaluate their effectiveness. Removal efficiencies of target chemical contaminants are determined by comparison of treated and untreated water samples via chemical analyses, and rapid in vitro bioassays such as the adult hydra bioassay and the chick embryotoxicity screening test.

Polycyclic aromatic hydrocarbons and pentachlorophenol: Wood-preserving facilities have been identified as a significant source of polycyclic aromatic hydrocarbon (PAH) contamination in soil and groundwater. Common contaminants at these sites include pentachlorophenol (PCP), the most acutely toxic of the chlorinated phenols, and creosote, a complex mixture of more than 400 compounds, 85-90% of which are PAHs. By bonding various organoclays onto quartz as a solid support, Dr. Phillips has developed a Claypac media that is effective in removing many of the toxic contaminants from groundwater at wood-preserving waste sites. 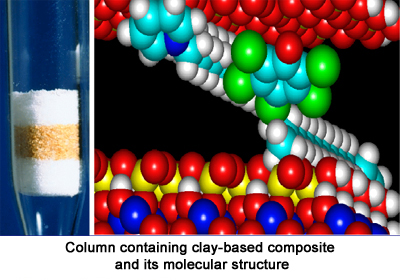 Following initial bench studies, Dr. Phillips conducted field tests at a former wood-preserving facility in the northwestern United States, which is on the National Priorities List. Prototype filtration columns packed with Claypac composites reduced the contaminant load from the oil-water separator (OWS) effluent stream by 97%. The concentrations of benzo[a]pyrene and PCP were considerably reduced (i.e., >99%). The effectiveness of sorption of PCP from the OWS effluent by the Claypac was confirmed using a PCP-sensitive adult hydra bioassay. Studies were also conducted to compare remediation efficiencies of columns packed with Claypac or GAC with samples of the effluent stream from a bioreactor. Although Claypac columns reduced the majority of contaminants, they were less effective in diminishing the levels of lower molecular weight PAHs. Conversely, GAC was more effective in removing the lower molecular weight PAHs, except for naphthalene and PCP. Laboratory studies utilizing radiolabeled compounds are in progress to determine optimum ratios of Claypac to quartz or GAC substrates for contaminant removal.

Native clays and sand, the basis for the Claypac system, are abundant and readily available natural materials. Thus, this sorbent system is relatively inexpensive to produce. In a time when cost minimization is an important consideration for hazardous waste remediation efforts, Claypac shows great promise as an inexpensive, yet highly effective method for removing diverse organic compounds from contaminated waters.

Chemoprevention of aflatoxicosis: Aflatoxin-producing molds are ubiquitous in the environment and commonly contaminate food items derived from a variety of grains and oilseeds. Moreover, aflatoxin B1 is a very potent carcinogen and hepatotoxin. Dr. Phillips has developed and patented a practical and effective approach to the problem of aflatoxin contamination of animal feeds – the dietary inclusion of processed calcium montmorillonite clay (NovaSil™). When ingested in the diet, NovaSil™ acts as an enterosorbent that rapidly and preferentially binds aflatoxins in the gastrointestinal tract of animals, resulting in decreased aflatoxin uptake and bioavailability. NovaSil™ and similar clay-based sorbents are now being used in 10% of animal feeds worldwide to prevent aflatoxicosis. Dr. Phillips is optimistic that this same technology may one day be applicable and sustainable for the protection of humans by diminishing aflatoxin exposure and improving human health.

Detection of aflatoxins: In recent studies, Dr. Phillips used nanostructuring methodologies to develop various formulations of NovaSil™ clay on the surface of quartz, and then evaluated the clay/quartz composites for their efficacy in the cleanup and analysis of aflatoxin B1 from aqueous solutions and contaminated grain samples. NovaSil™ clay, with high affinity for aflatoxins, was electrostatically anchored as a thin film onto the surface of quartz particles using poly(diallyldimethylammonium chloride), or PDDA. As a solid phase extraction media, these composites may provide an alternative and cost-effective method for the field-practical cleanup and analysis of aflatoxins from contaminated samples. Studies are ongoing in the Phillips laboratory to optimize affinity media for the detection of a variety of aflatoxin congeners, including aflatoxin M1 in urine as a biomarker of human and animal exposure.