PCBs in the Hudson River

A National Academy of Sciences committee has stated that "Polychlorinated biphenyls (PCBs) pose the largest potential carcinogenic risk of any environmental contaminant for which measurements exist."

Since 1929, over one million pounds of PCBs have been released into the Hudson River. Dumping and leakage from General Electric (GE) plants at Fort Edward and Hudson Falls have resulted in PCB contamination of the water, animal and plant life, and sediment in the Hudson River. This contamination is present from Hudson Falls to New York City -- 200 miles that compose the nation's largest non-government Superfund site. The SRP funds wide-ranging research into the human and environmental impacts of PCB contamination. For example, SRP researchers conducted a study of anglers living on the lower Hudson River. They learned that despite extensive educational programs, people who fish in the river - for recreation, cultural practice, or subsistence - continue to bring the fish home to their families and eat them. Scientists also used biomarkers to provide the first evidence that persistent pollutants like PCBs move through the food chain to humans. They found that consumers of locally caught fish and shellfish have higher levels of PCBs, dichlorodiphenyltrichloroethane (DDT), chlordane, and mercury in their bodies than non-consumers. They also showed that the more fish contaminated with PCBs and dichlorodiphenylethylene (DDE) a person consumed, the greater the amount of these chemicals that appeared in their blood serum.

Working in collaboration with the New York State Department of Environmental Conservation (NYSDEC), the lead state agency involved in the Hudson River remediation issue, SRP-funded researchers analyzed and compared PCB concentrations in recent sediment cores from the river to archived samples from as far back as the 1950's. The researchers determined that PCB degradation processes in Hudson River sediments are not nearly as extensive as predicted from laboratory studies, and that the degradation rates decrease dramatically after about one year. This information was seminal in the EPA decision to rule that GE must dredge sections of the Hudson River to remediate PCB contamination.

SRP researchers have provided technical support to decision makers, both directly and via scientific publications: 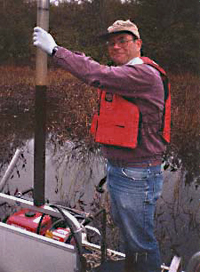 While not directly related to PCBs in the Hudson River, it is important to note that the SRP-funded research conducted to evaluate contaminants in the river and in the New York Harbor, affords SRP scientists access to unique data and samples that will be invaluable in the determination of both the geographic and temporal impact of the WTC disaster. These researchers have significant amounts of historical data on levels of PCBs, dioxins, PAHs, and trace metals including cadmium, copper, lead, mercury, and zinc at several NY/NJ Harbor sites, including two within 2 miles of the former WTC. They also collected samples in mid October of 2001. Analyses of these samples will provide critical insight into the impact of the WTC disaster on persistent contaminant levels in the NY/NJ harbor.