When a bird produces an egg, it deposits an embryo into a self-contained environment that protects and nourishes the developing young until it is ready to emerge into the world. Just like any other living, breathing organism, the egg-bound embryo produces metabolic waste products. In the absence of an umbilical cord to pass these wastes back to its mother for processing, the embryo must make room in its egg to store the wastes. It keeps them in a membranous sac called the chorioallantoic membrane, or “CAM” for short. When it hatches, the nestling leaves the CAM behind, attached to the eggshell. Based on the many successes that have come from analyzing urine, milk and other excreted materials, SRP researchers are using the excreta left behind in the egg’s CAM to assess contaminant exposure in oviparous (egg-laying) species. 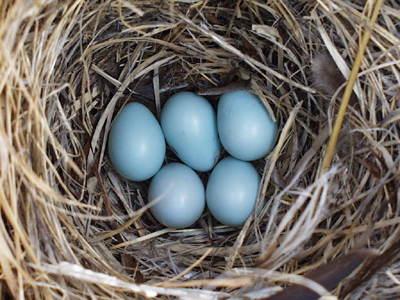 Working with Dr. Michael Hooper at the University of Washington Superfund Research Program, Dr. George Cobb and his students from the Institute of Environmental & Human Health at Texas Tech University (TTU), have developed methods whereby the wastes left in eggshells provide valuable information on exposure to organochlorine contaminants such as polychlorinated biphenyls (PCBs), endosulfan and a wide variety of residual organochlorine pesticides that remain in the environment since their phase out in the 1970s. Preliminary dosing studies with chickens provided the evidence necessary to validate the approach. Female chickens were fed diets with several specific PCB congeners and the pesticide, endosulfan. The majority of these chemicals ended up in the yolk and albumen of the egg, though as the embryo grew, greater amounts were excreted into the CAM. By the time of hatch, the total levels of each of the contaminants in the CAM correlated very well with the concentrations of each chemical in the original egg as well as the liver and blood of not only the hatchling chicks, but also the hen that laid the eggs. Further, when the investigators measured the levels of metabolic enzymes that respond to these contaminants (the cytochrome P450s) they found that the CAM contaminant levels also predicted the levels of induction for these liver enzymes in both the hen and the hatchling. The CAM thus represents a gold mine of information on both the adult bird and the hatchling with the added bonus that the samples can be collected non-lethally after the nestling hatches. 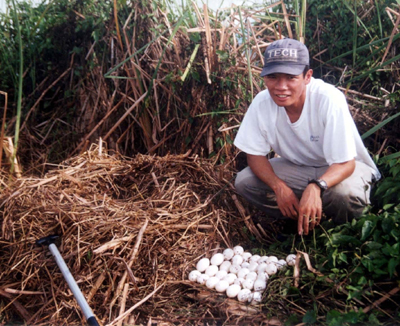 It should be noted that birds are not the only egg-laying species, and this fact has not been missed by Dr. Cobb and his students. Though the method they developed has been applied to a variety of wild avian species (such as great blue herons and black-necked stilts) the application to other egg-layers is just as interesting. Studies to date have successfully demonstrated the applicability of the approach to loggerhead sea turtles and American alligators nesting along the South Carolina coast, American alligators from the Louisiana bayous and the threatened Morelet’s crocodile from northern Belize, in Central America.

Much of this research’s success is due to the impetus the SRP has provided for non-lethal approaches necessary for human health assessments. The work with CAMs from eggs grew from a desire to apply these techniques to better study wildlife using non-invasive, non-lethal approaches. The result has been the successful deployment of a technique that provides valuable exposure and effect information for both the chicken and the egg.