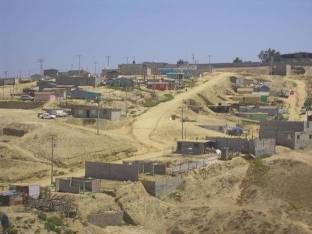 The Los Laureles Canyon, home to 65,000 residents, is upstream from a sensitive estuary that straddles the border of the United States and Mexico. Erosion and poor sanitation contribute to environmental and human health problems alike.

The border between the United States and Mexico may be fenced, monitored, and patrolled, but that doesn't stop watershed pollution from affecting both sides of the border. University of California-San Diego (UCSD) Superfund Research Program (SRP) researcher Keith Pezzoli, Ph.D., is trying to change that. His efforts are chronicled in the new documentary "Los Laureles Canyon: Research in Action," which airs on UCSD-TV and was screened at a symposium at the American Association for the Advancement of Science (AAAS) Annual Meeting on February 22, 2010 ( watch video ).

Pezzoli is engaging fellow researchers, community leaders, and government officials from both countries in a "scholarship of engagement" to create a sustainable community for the 65,000 inhabitants of the Los Laureles Canyon living near the border in Tijuana as part of a concerted effort to remediate the area's waters.

The film grew out of a tour that Pezzoli and Environmental Research Scientist Hiram Sarabia conducted as part of the American Public Health Association (APHA) 2008 Annual Meeting. The final result, produced with the help of UCSD-TV, follows researchers, students, and community members in their quest to find solutions for the Los Laureles Canyon settlement.

The growing population of the canyon, challenged with poverty and poor sanitation, places a significant environmental burden on the Tijuana Estuary in California. Untreated wastewater, erosion, and heavy metals, such as zinc, copper, and lead, clog and pollute the estuary waters, which provide a home to endangered and migratory birds and butterflies. According to Pezzoli, the United States currently spends $1.5 Million every year clearing sediment and pollutants out of this estuary on the U.S. side of the border so the water may flow into the Pacific Ocean. 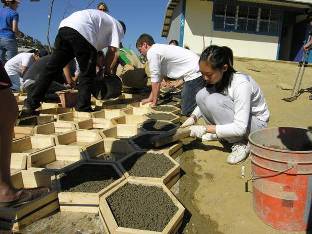 UCSD students work with residents to build pervious concrete brick in a local schoolyard. Efforts to streamline the process have resulted in jobs for the residents and the promise of improvement in the community.

After exploring the scope of problems in the border area, the film then documents one example of possible solutions. Pezzoli and Sarabia travel down to the canyon with a team of students and show the residents how to build roads made of pervious concrete. Closely resembling a honeycomb made of popcorn, pervious concrete roads allow water to run through them and into the estuary downstream. The roads improve health by reducing the dust produced as a result of driving, as they also act as a barrier to further erosion.

Though it is a small act, these activities have a major impact on the lives of the residents, who feel as though the Mexican government has abandoned them. The students were able to make approximately 700 tiles of pervious concrete, but to have a significant effect; the residents of the canyon need approximately 100 times that amount. The National Oceanographic and Atmospheric Association (NOAA) Coastal Training Program Coordinator for the estuary, Oscar Romo, has been working with residents to streamline the process. This has an additional benefit: the creation of jobs for the residents, with a final product that benefits the community.

Cooperative efforts such as the one documented in the film are essential, according to Pezzoli. "A lot of the development in the world over the next 30 years will be like this," he said. There are benefits to science research, as well. "We are testing soil for contaminants using Superfund research technology. We're bringing advanced techniques into the field to get a better grasp on pollution."

UCSD-TV is translating the film into Spanish and will be available in late 2010.