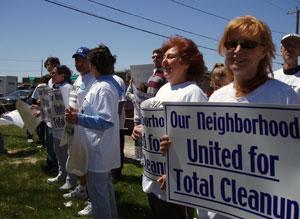 The Outreach Core at Brown University has worked closely with the Environmental Neighborhood Awareness Committee of Tiverton (ENACT). ENACT was formed in 2002, after residents of the Bay Street neighborhood discovered that their homes were built on fill taken from a coal gasification plant. It was formed as a grassroots community group to advocate for more extensive discovery and cleanup. Testing by the Rhode Island Department of Environmental Management revealed high levels of heavy metals and volatile and semi-volatile organic compounds. Approximately 95 properties are affected, and ENACT represents approximately 200 residents of the neighborhood. In March 2005, ENACT filed suit against the New England Gas Company to force remediation.

The Outreach Core has assisted the ENACT executive board in developing press releases and other media contacts. They assisted in the preparation of a presentation ENACT delivered in October 2005 to representatives of local and state agencies to update these representatives about the protracted nature of their problem, and to demand further action. This meeting was attended by approximately 80 community members from the Bay Street neighborhood and beyond.

ENACT's website is about to expire, and the Outreach Core is helping them migrate the website to a new host, and are working to expand its features so that it will become a more effective vehicle for keeping residents and members up to date on progress in the litigation and cleanup. The Core has also been working with ENACT members to document the history of their efforts; this history will become a part of the website and will also be produced in booklet form.

One of the more substantial obstacles the group has faced is the lack of direct evidence of the deposition of contaminated fill in the neighborhood. Core investigators have assisted ENACT in their efforts to locate residents or former residents who remember seeing fill dumped there, or who may have been contracted by the gas plant or the town to deliver fill. The investigators have contacted churches, senior centers, and civic groups in and around Tiverton, and have enlisted their help in finding residents who might have knowledge. Two of these groups have given permission for ENACT to make presentations to their members.

One of the most difficult impacts the group has had to contend with is the impact the discovery of the contamination has had on property values. Residents of the Bay Street neighborhood have experienced difficulty in obtaining home equity loans, because the lenders believe the property to be valueless (even though the town continues to tax these properties at the value that was assessed before the contamination was discovered). Without being able to leverage the equity in their property, residents have had to delay improvements to their properties ranging from maintenance and upkeep (e.g. roof repairs) to renovation or expansion. Core investigators have contacted the elected state officials who represent this district to inquire about developing legislation that will establish a mandated pool (similar to a high-risk auto insurance pool) to cover home equity loans so that residents can address necessary repairs. The Outreach Core's proposal has attracted the attention of both the state representative and state senator, and core investigators are hopeful that such a bill could become a useful model in other states as well.

An important aspect of the Core's outreach activities is to help community groups network with other communities that have similar experience, either with similar exposures or to find help and support with technical problems. Although there are numerous coal gasification sites around the country, few have impacted residential communities. Core investigators have discovered several other communities (in Maine, Iowa, and California) that have been impacted by coal gasification waste, and put ENACT members in touch with members of the grassroots anti-toxics groups in those communities. These networks will be a good resource for the ENACT board with respect to technical questions about cleanup, advice on strategies and tactics to force the gas company to take responsibility, and for moral support and advice in what promises to be a lengthy struggle.

Contaminated Superfund sites and Brownfields pose serious economic and environmental challenges that require a multidisciplinary, team approach. Nanotechnology promises novel tools to facilitate remediation of these sites; however, the potential adverse environmental and health impacts of this new technology must be determined. It is hoped that this interdisciplinary initiative will advance research in the emerging discipline of nanotoxicology and provide educational training for the next generation of engineers and scientists who will apply nanotechnology for environmental sensing and remediation.