Collaborations Between Scientific Communities in the U.S. and Mexico

The 2,000 mile border between the United States and Mexico is a unique arid region spanning four U.S. and six Mexican states. Environmental concerns along the Border arise from a complex combination of regional, national, and international forces, including patterns of economic growth and trade, urbanization, public policies, and demographic and social dynamics. Families living in this region are at risk of exposure to a wide variety of environmental contaminants including arsenic, trichloroethylene, lead, pesticides, combustion gases, and the particulate pollutants resulting from increased vehicle traffic between the two nations. Mexico's National Institute of Ecology estimates that approximately 1 million tons of hazardous waste cross the Border annually, and reports that Border industries often engage in uncontrolled disposal of hazardous waste that impacts the shared aquifers in the Border region. Residents of Border communities frequently have too little knowledge and too few resources to adequately protect their health.

In addition to funding basic and applied research projects relevant to environmental contamination issues, the SRP supports outreach and communication efforts that have direct impact on the environmental and public health of affected communities. The SRP believes that outreach is a critical mechanism which allows the Program to work with broader audiences, to expand its vision, and to translate research findings into strategies and solutions that can improve public health. The SRP would like to highlight this aspect of the SRP Program, and to acknowledge the accomplishments of Dr. Dean E. Carter who retired from his leadership role at the University of Arizona (UA) SRP. 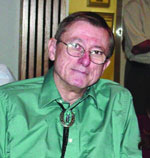 Since 1990, SRP-funded researchers at the UA have worked to build an Outreach Core to address U.S.-Mexico Border health issues. This Core was established to build close ties with Mexico concerning Border health issues, and to create a pipeline for science information transfer and for training Mexican toxicologists, hygienists, and environmental engineers/scientists. This effort was initiated and led by Dr. Dean Carter whose foresight and interest in U.S.-Mexico Border health issues resulted in the establishment of the U.S./Mexico Binational Center for Environmental Studies and Toxicology. Dr. Carter's philosophy, beginning more than 20 years ago, emphasized that any effort to make significant improvements would require a collaborative effort between the U.S. and our Mexican neighbors. In his words, "We share a border, share environmental problems, and we must share the solutions as full partners."

Dr. Carter began with the vision of building a program that could serve as a research and information resource and move research results from the laboratory and into the public and private sectors in the border region. UA scientists have partnered with Mexican scientists to build closer collaborations between scientific communities in the U.S. and Mexico; exchange and transfer environmental expertise; develop coordinated strategies to determine levels of exposure and characterize health effects; develop preventive measures that both countries can use; and apply remediation technologies to remove/destroy hazardous wastes.

Education: Education and training efforts in Spanish undertaken by the UA researchers are focused to develop necessary expertise in Mexico, and to reach Spanish-speaking communities in Mexico and the U.S. UA approaches include:

Scientific Conferences: Dr. Carter's team has organized a series of meetings in an effort to lay the groundwork for collaborative interactions between U.S. and Mexican scientists so they can work together to define common environmental problems and health hazards, determine approaches to resolving these problems, define the infrastructure needed to handle these common concerns, and assess shortfalls in personnel and technology needed to address these common issues. These meetings have acted as a catalyst for other SRP-sponsored "border meetings" in Texas, New Mexico, California, and Mexico City.

Research Collaborations: SRP-funded scientists at UA carry out research in concert with scientists at universities and government agencies in Mexico. Collaborative studies concerning the impact of mining and smelters on exposure of children to lead, and exposure of adults to arsenic and pesticides through drinking water are examples of such efforts. These collaborations have resulted in numerous presentations and publications with Mexican scientists as co-authors and full partners in the research. These collaborations frequently serve as the foundations of grant applications with the Mexican colleagues as co-investigators.

The efforts of UA SRP investigators to collaborate with Mexico on common environmental problems led to a Memorandum of Understanding between UA and CONACyT (Mexico's ministry of science and technology) entitled "U.S./Mexico Transborder Consortium for Environmental Studies." The goal is for UA scientists to collaborate with a consortium of Mexican universities to establish a Binational Center for Environmental Studies and Toxicology. The Centro de Investigacion y de Estudios Avanzados (CINVESTAV), an institute of graduate studies and member of the Mexican National Association of Universities and Higher Education Institutes, has been selected as the consortium coordinator. Goals for the Center include:

Dr. Carter is an innovator who understands that environmental contamination in border areas results in complex science and culture issues, and that realistic solutions require input from diverse disciplines. Dr. Carter's work on U.S.-Mexico border health issues has been groundbreaking and productive in the areas of education, scientific meetings and research. Perhaps his greatest accomplishment has been that he has been able to stimulate Mexicans, in both government and non-government positions, to recognize that they have the same needs in the area of environmental health as we do in the United States, and that working as partners we will accomplish more than working alone. This has led to the development of real solutions for communities at risk of exposure to environmental contaminants. The SRP would like to take this opportunity to thank Dr. Carter for his remarkable contributions.

With the retirement of Dr. Carter, a new team of individuals has stepped forward to coordinate the U.S.-Mexico efforts.