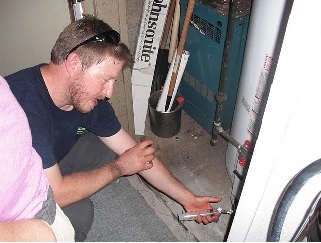 While integrated approaches are needed for environmental problems, dynamic multidisciplinary research teams can be difficult to form, let alone maintain. All too often research projects that begin as teamwork end with individual researchers conducting research in parallel. The American Recovery and Reinvestment Act (ARRA) NIH Administrative Supplements challenged researchers to conduct research in a truly collaborative and integrated manner, not only across disciplines, but also across institutions. In response to this challenge, Brown University's Superfund Research Program (SRP), which includes researchers from two institutions (University of Massachusetts Dartmouth and Brown University), collaborated with the Superfund Research Program at Boston University's School of Public Health (BUSPH) to investigate the issue of vapor intrusion.

The ARRA project stemmed from an existing Brown SRP engineering research project, led by Eric Suuberg (Brown) and Kelly Pennell (UMass-Dartmouth), that is developing computational models of vapor intrusion. Vapor intrusion occurs when vapors in the subsurface leach into indoor spaces, contaminating indoor air. This problem has affected numerous communities across the country. It is complex and includes aspects of community engagement, risk assessment, exposure assessment, advanced field sampling techniques and computational modeling, among others.

Five SRP researchers with complementary, yet unique, expertise are involved in the ARRA project. Together they are approaching vapor intrusion by focusing on a neighborhood outside of Boston, MA where vapor intrusion is a concern and the Massachusetts Department of Environmental Protection (MassDEP) is actively overseeing actions being taken by the Responsible Party (RP). 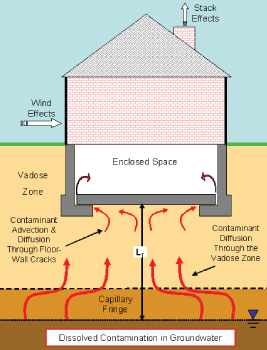 From the beginning of the project, there was consistent, collegial and productive interaction between the collaborating researchers. Through conference calls and in-person meetings, the researchers developed an integrated team approach. The team (researchers and students) has spent countless hours together, including attending a 24 hour hazardous waste training certification program so that they could collect vapor intrusion samples in the field.

One reason this team has worked so well together is that each member brings a unique and valuable perspective to the project. No single aspect of the research can be completed without the input or sharing of knowledge from another collaborator. Kelly Pennell (UMass-Dartmouth) directed the overall approach of the project and provided specific expertise regarding field sampling techniques and protocols. However, the overall success of the field sampling hinged entirely on recruiting residents to participate in the study. Madeleine Scammell (BUSPH) provided expertise about community engagement and recruited residents to participate in the study. This task was complicated by many factors, including the fact that participation in the study requires holes to be drilled through the floors of participants' homes. Regular interaction and communication with property owners is critical to the success of this project. Beyond recruiting participants, Madeleine Scammell and Wendy Heiger-Bernays (BUSPH) are responsible for the sharing of data with residents and MassDEP. Heiger-Bernays serves on several MassDEP advisory boards, so her input to this project has been critical for ensuring sampling approaches are appropriate from a regulatory stance. 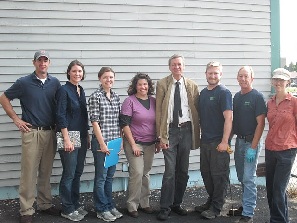 While the recruitment of participants and sharing of data is an important part of this project, the scientific input about how to sample, when to sample and what media to sample is also of much importance. Michael McClean (BUSPH), with Wendy Heiger-Bernays and Kelly Pennell, defined sampling protocols and analytical procedures. Michael McClean and Kelly Pennell directed field-sampling personnel to ensure proper collection of samples in the field. Kelly Pennell and Eric Suuberg (Brown) are interpreting the sample results and developing a computation model to investigate vapor intrusion processes at the site. Together the entire team will interpret the overall research results to evaluate vapor intrusion exposures and risks.

The project is still underway and will continue for many more months. Although many of the overall research findings are still emerging, a major outcome has been the relationships that were established and developed between the separate SRPs. Synergies and overlapping research interests have been identified that are not only benefitting the current ARRA project, but will also inform future research activities.