The University of Washington (UW) Superfund Research Program (SRP) and the Center for Ecogenetics and Environmental Health (CEEH) filled the Allen Library Research Commons at UW with approximately 70 attendees for an educational workshop on EPA's Duwamish River Superfund Cleanup Proposal. 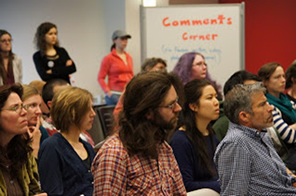 Representatives from each group presented their perspectives on the EPA plans for cleanup of the Duwamish River. All participants were also encouraged to make a public comment by June 13. The comment period is the only chance for the public to speak up and influence the EPA’s Cleanup Plan.

In 2001, a 5.5 mile long stretch of the lower Duwamish River was declared a federal Superfund Site. According to the EPA Proposed Plan, more than 40 different toxicants contaminate the river, mostly in the river bottom sediment. The contaminants of highest concern are polychlorinated biphenyls (PCBs), dioxins and furans, carcinogenic polycyclic aromatic hydrocarbons (PAHs), and arsenic.

For more information about the workshop and the Duwamish Cleanup Proposal, visit the Ecogenetix website.