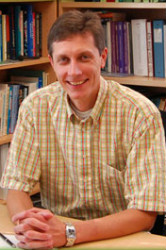 Trichloroethylene (TCE), a chemical that was often used as a degreaser and in dry cleaning, has been reclassified from a cancer "hazard" to "carcinogenic to humans" during an evaluation by 18 international scientists, including University of North Carolina (UNC) Superfund Research Program (SRP) grantee, Ivan Rusyn, M.D., Ph.D.

Rusyn chaired a subgroup of scientists who focused on mechanistic evidence used to evaluate this change in classification. Mechanistic data results from or is related to a process that involves physical, rather than biological or chemical change.

The scientists convened at the World Health Organization's International Agency for Research on Cancer (IARC) in Lyon, France. During an eight-day meeting in October 2012, the group evaluated evidence and reached conclusions about the potential of several chlorinated solvents, including TCE, to cause cancer in humans.

The scientists' assessments will be published as volume 106 of the IARC Monographs . A summary of the evaluations was published Oct. 26 in Lancet Oncology .

"TCE was widely used for degreasing metal parts and in dry cleaning and is still used in chlorinated chemical production," said Rusyn. "It is one of the most pervasive environmental contaminants and, despite numerous studies over the past 50 years, the conclusion that it is a 'known human carcinogen' has only just been reached."