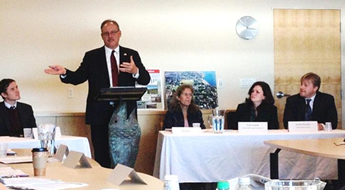 During the meeting, Curt Spalding discusses the role of EPA Region 1 and their approach to finding environmental solutions in New England.
(Photo courtesy of James Rice)

Senator Reed spoke about the link between environmental health and economic progress, and the need to foster a new generation of environmental stewards. McCarthy emphasized that environmental issues are economic issues, stressing the importance of working and partnering with scientists and advocates that work hard and know the facts, issues and priorities at the state and community level.

Because it was a small and intimate group, the participants were given a chance to speak and participate in a discussion related to environmental issues affecting Rhode Island. Rice took the opportunity to inform the group about the SRP. He explained how the Brown SRP Center is a very visible and active environmental program in Rhode Island, which is strongly supported by regional leaders such as Spalding, Reed, and Coit. He discussed the SRP in general, explaining its role as an NIEHS-funded grant mechanism and its ties with stakeholder groups whose work complements the program, such as the EPA and the Agency for Toxic Substances and Disease Registry (ATSDR). Rice also stressed and reiterated the role of Brown SRP, the importance of their work in Rhode Island, and NIEHS support.