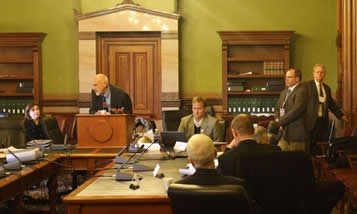 Environmental health topics ranging from indoor air pollution in schools to the health effects of hydrofracturing for natural gas were the subjects of a workshop in January 2013, which was co-hosted by the NIEHS-funded University of Iowa Superfund Research Program (SRP). The purpose of the Midwest Environmental Health Summit, was to inform state legislators of environmental health issues in the Midwest. More than 20 legislators and a number of legislative staff attended the summit in Des Moines, Iowa.

The Iowa SRP worked with the NIEHS-funded Iowa Environmental Health Science Center, along with the National Conferences of State Legislators and the American Lung Association, to organize and support the successful two-day workshop. Sessions included information on airborne polychlorinated biphenyls (PCBs) which are the Iowa SRP’s main research focus, radon, biofuels, agriculture, and hydrofracturing.

The legislative workshop in the Midwest was the fourth of its kind convened by the Iowa SRP RTC since 2007.