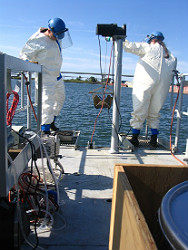 University of Iowa Superfund Research Program (SRP) Investigator Keri Hornbuckle, Ph.D., was highlighted in the Environmental Health News article, "Dredging could unleash PCBs in Indiana community" , for her work on polychlorinated biphenyls (PCBs) in water sediments and their release into air, resulting in human exposure. Hornbuckle discusses how dredging of a highly contaminated canal along the shore of Lake Michigan, that has already begun, could release harmful levels of PCBs into an Indiana community.

To dig a deeper canal for ships, the U.S. Army Corps of Engineers is removing large volumes of contaminated sediment – equivalent to about 160 million truckloads – from the Indiana Harbor and Canal.

In a $180-million project that will take 8 to 10 years, the Army Corps will be removing 1.6 million cubic yards of sediment from several feet below the surface, where PCB concentrations are up to six times higher than surface sediments, according to 2011 study a led by Hornbuckle.

Widely used as electrical insulators and industrial lubricants, PCBs have been linked to many health effects, including cancer, reduced IQs in children and asthma.

A new, as-yet unpublished study from Hornbuckle’s group has also found that indoor air in East Chicago, Indiana already has PCB levels about three times higher than its outdoor air.

“If the underlying sediment is twice as concentrated with PCBs as the surface sediment they’re getting rid of, then it’s likely the airborne levels will double” in East Chicago, Hornbuckle said.

The potential for additional PCBs from the dredging could add to a heavy pollution burden already faced by East Chicago’s 29,764 residents, who are 92 percent Hispanic and African American, according to U.S. Census data. Thirty-six percent of its households have incomes under the poverty level, more than three times higher than Indiana’s poverty rate. The region, Lake County, has the state’s highest hospitalization rate for asthma, according to the Indiana Department of Community Health.