Researchers at the Iowa University Superfund Research Program (Iowa SRP) are measuring polychlorinated biphenyls (PCBs) in the air in the communities around the Indian Harbor and Canal Dredging Project to determine if the project poses any health risks for nearby residents. 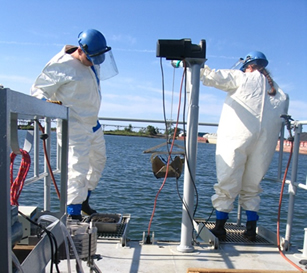 PCBs can enter the air during the process of removing contaminated sediment from the canal bottom and then storing it above ground. Because of this threat, Iowa SRP researchers are conducting the Airborne Exposures to Persistent Organic Pollutants (AESOP) study to assess exposures to atmospheric PCBs. They are collecting and comparing samples of air for PCB concentrations before and during dredging operations. They will also analyze samples of blood for PCB metabolites from children and their mothers who live in the affected community.

Unfortunately, according to a 2010 Iowa SRP study , the area is already contaminated with legacy pollutants including PCB contamination from intense past industrial activity, and this dredging project has the potential to increase PCB exposures in the community.

In anticipation of the dredging project, the researchers collected many air samples inside and outside homes and local schools. They also took annual blood samples. These samples and the resulting analysis of environmental exposures will be compared to people living in a low-exposure area of rural Iowa. Now that the dredging has begun, Iowa SRP researchers continue to collect data.

The U.S. Army Corps of Engineers is conducting the dredging operation to create a deeper canal for ships. The project will place 3.5 million cubic meters of sediment contaminated with PCBs into a confined disposal facility a half a mile from the East Chicago Junior High and High Schools.