Young gymnasts may be exposed to hormone-disrupting flame retardant chemicals from ingesting or inhaling dust created by foam blocks, according to a study from the Boston University (BU) School of Public Health.

“Our results suggest that the study gymnasts are highly exposed, but it’s unclear what health risks, if any, they would face as a result of this exposure,” said Courtney Carignan, lead author of the study published online last week in the journal Environmental Science & Technology . 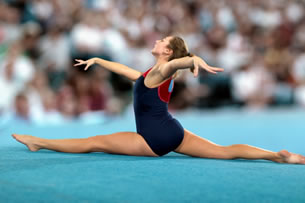 Competitive gymnasts may spend more than 20 hours a week at gyms.

Researchers affiliated with the BU and Duke University Superfund Research Program (SRP) Centers collected blood and hand-wipe samples from 11 female college-age gymnasts training at one gym in the Northeastern U.S. All participants reported practicing gymnastics for at least 12 years and, at the time of the study, averaged 19 hours a week at the gym.

The gymnasts’ blood contained levels of a compound called bromodiphenyl ether (BDE)-153 that were comparable to U.S. foam recyclers and carpet installers, groups with high occupational exposure. BDE-153 is a component of the flame retardant PentaBDE, commonly used in furniture foam, which was banned in 2004.

Samples of dust and foam taken from the participants’ gym and two other U.S. gyms suggest that the foam blocks – some of which were up to 20 years old – were the likely source. Most gyms contain a large pit filled with thousands of foam polyurethane blocks, a soft landing for gymnasts learning new acrobatic moves. Hand-wipe samples from the gymnasts contained two to three times more of the banned polybrominated diphenyl ethers (PBDEs) and newer flame retardants after practice than before practice.

Previous studies have linked PBDEs, which may persist in the body for years after exposure, to neurological effects in children exposed in the womb.