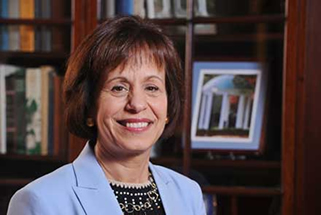 Carol Folt, Ph.D., interim president of Dartmouth College and member of the NIEHS-funded Dartmouth Superfund Research Program, was elected the 11th chancellor of the University of North Carolina at Chapel Hill (UNC-Chapel Hill) on April 12, 2013. Folt, who will assume her new role July 1, will be the first woman to lead UNC.

“Over the past three decades, Carol Folt has accumulated a wealth of academic and leadership experience at one of the top-10 universities in America,” said Tom Ross, President of the 17-campus University of North Carolina system. “At each step along the way, she has proven herself to be an engaged and effective leader who promotes openness and collaboration, strategic thinking and creative problem-solving, and an unwavering commitment to academic excellence and student success.”

A faculty member at Dartmouth since 1983, Folt was named provost in May 2010 and later appointed Dartmouth’s interim president in July 2012. An internationally recognized environmental scientist and award-winning teacher, she has served the college in a series of senior academic and administrative roles since 2001.

A press release about Folt’s appointment is available through the UNC-Chapel Hill website.