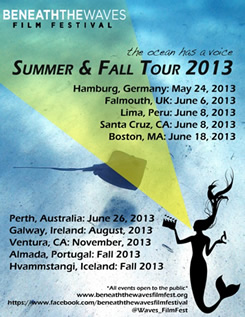 The Dartmouth Toxic Metals Superfund Research Program (SRP) video, “ Mercury: From Source to Seafood ,” screened June 8 in Santa Cruz, Calif. as part of the Beneath the Waves Film Festival . The film, created by the Dartmouth SRP, describes the health effects of mercury in seafood and simplifies the complexities surrounding seafood consumption.

According to the Dartmouth SRP , two-thirds of the mercury entering the environment comes from man-made sources including industrial plants, coal burning, and incinerators, and the additional one-third enters from natural sources. The 10-minute video follows the journey of mercury from man-made and natural sources into the seafood we eat. It discusses which species of fish contain the least and most mercury, and explains the possible adverse health effects of consuming high-mercury fish, particularly for pregnant women and young children. The film also describes the health benefits of eating low-mercury fish and the importance of reducing the amount of mercury that enters the environment.

The Dartmouth SRP’s film was chosen to be a part of the festival in March. The film festival was organized by Anne Gibbs from the U.S. Geological Survey and hosted by the Monterey Bay National Marine Sanctuary Exploration Center. The goal of the events is to facilitate ocean conservation by bringing together marine films from around the world for open discussion, while providing hands-on educational opportunities.