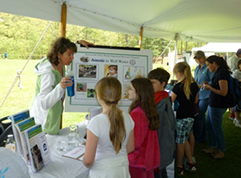 At the booth, Laurie Rardin explains how arsenic can get into drinking water.
(Photo courtesy of Laurie Rardin) 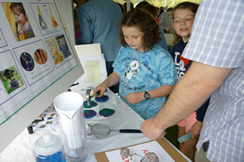 Students enjoyed hammering clay “cells,” which represented what happens to the cells in your body when they are exposed to arsenic.
(Photo courtesy of Laurie Rardin)

At Dartmouth’s booth, RTC Coordinator Laurie Rardin and CEC Coordinator Michael Paul explained to the children that according to the N.H. Department of Environmental Services , arsenic in New Hampshire occurs naturally in the bedrock and can be released into drinking water from private wells drilled into bedrock fractures. The students participated in interactive activities to show them how water doesn’t smell or look differently when contaminated with arsenic, but can still increase the risk of several types of cancer and create health problems such as neurological disorders when a person is exposed.

The Festival was held May 8 in honor of Drinking Water Awareness Week. At the event, students learned about water conservation, water testing, groundwater pollution and keeping water clean. The fourth graders could also participate in a water science fair.

To learn more about Dartmouth’s efforts to explain the risks associated with exposure to arsenic in private well water, visit the Dartmouth SRP website .