A recent study in the prestigious journal Nature has shown that chemical signatures in teeth can be used to uncover aspects of early life dietary transitions. Manish Arora, Ph.D., NIEHS R00 early investigator grantee and former postdoctoral trainee at the Harvard University Superfund Research Program (SRP), and his research team developed a method to measure early life dietary transitions based on barium variations in teeth. 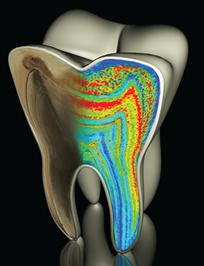 Molar tooth model with the cut face showing color-coded elemental patterns merging with a microscopic map of growth lines, which have been accentuated to reflect their ring-like nature.

"Early life diet, including breastfeeding, is important in so many ways. It is crucial for infant health but can also serve as a pathway for chemical exposure,” said Arora. “Given that maternal recall of breastfeeding practice and early life diet can be biased when recorded many years later, an objective retrospective biomarker would provide a major advance to studies on children's health".

Prenatal barium transfer is restricted by the placenta, but marked enrichment occurs immediately after birth from mother’s milk or infant formulas, which contain higher barium levels than umbilical cord sera. In response to these variations in dietary barium exposure, levels in enamel and dentine increase at birth and remain elevated for the duration of exclusive breastfeeding. Barium levels in teeth rise further with introduction of infant formula because most cow-milk and soy based formulas contain much higher levels of barium than human milk. Arora’s team mapped these barium variations in teeth using a laser ablation method that he has previously successfully used in studies on lead and manganese exposure.

This method has far reaching applications, according to Arora. It can be applied to epidemiologic investigations of the health consequences of breastfeeding and chemical exposures during early life as well as studies on primate evolution. It can also be used to specifically investigate the health effects of barium, and differences between breastfeeding and infant formulas.

“One of the studies we plan to undertake from this work is to investigate how exposure to barium and other elements in early life will affect children’s health,” said Arora. “Our biomarker provides a unique opportunity to study breastfeeding and infant formula use from the perspective of exposure to these elements.”

Arora’s team first analyzed teeth from macaques with known diet histories to refine the method. They later tested teeth of children enrolled in the University of California Berkeley's Center for the Health Assessment of Mothers and Children of Salinas (CHAMACOS) study, where breastfeeding and infant formula use were recorded prospectively. Researchers found that they were able to predict early life dietary changes in the children based on this newly developed method.

An interesting application of this method arose when a several thousand year old Neanderthal tooth was made available. Using their method, the researchers also document the first early life dietary transition in a juvenile Neanderthal.

For details, see Arora’s publication in the journal Nature . Arora was also featured on NPR Morning Edition for his research.