December 3-5 — 2007 marked the 20th Anniversary of the Superfund Research Program (SRP). The two-and-a-half-day annual meeting, appropriately titled "20 Years of Success and a Vision for the Future," took place in Durham, North Carolina at the Washington Duke Inn. There were over 350 attendees, including graduate students and postdoc fellows, researchers, grantees, administrators, and program partners.

The 2007 meeting also marked the 10th Anniversary of the Karen E. Wetterhahn Award. Dr. Wetterhahn was the Program Director for Dartmouth College's SRP from 1995-1997. She died in 1997 following an accidental exposure to a few drops of dimethylmercury. Dr. Roxanne Karimi received the Wetterhahn Award for her work on "The Ecophysiology of Metal Accumulation in Aquatic Food Webs," which she presented to an audience of 300 on Tuesday, December 4th.

Student poster sessions were held on Monday and Tuesday evenings. Four students were recognized for their research and presentation. The awardees, Elizabeth Oesterling (University of Kentucky), Bryan W. Clark (Duke University), Courtney Kozul (Dartmouth College), and Karen Wovkulich (Columbia University), were recognized at the Wednesday morning Colloquium, "Visions for the Future," which focused on the highlights of the SRP, past and present, and the Program's future.

Natalie Johnson, Brown University senior, won an outstanding student poster award in the environmental section of the 2007 American Institute of Chemical Engineers National Meeting (Salt Lake City, Utah). Johnson, a major in chemical engineering, is working on an SRP-funded, independent project titled, "The Characterization and Capture of Mercury Released from Broken Fluorescent Bulbs". Natalie's research focuses on the growing use of the florescent light bulb, and what happens to the toxic mercury after the bulb breaks. In addition to measuring mercury vapor release, Natalie is developing an adsorbent system for capturing the toxin and stabilizing it in landfill environments.

A diverse group of scientists, including SRP investigators from Columbia University and the Harvard School of Public Health, is trying to make Bangladesh's polluted waters safe. But even with this innovative, multidisciplinary research effort, the indifference of the world's wealthy countries means that no long-term solutions are being implemented. The full article was published in the World Report section of the August 11, 2007 issue of The Lancet.

One study involved an 18-month field trial at the 100-acre Boston Mill mine tailings site adjacent to the San Pedro River. Testing evaluated growth of the salt- and drought-tolerant fourwing saltbush (Atriplex canescens) under the site’s neutral pH conditions, with and without compost amendment. Study results showed more than 80% of the 40 Atriplex transplants survived regardless of compost treatment. With the exception of lead, uptake did not exceed regulatory guidelines for metals (aluminum, arsenic, cadmium, copper, iron, mercury, manganese, and zinc). A two-year study initiated earlier this year on 1.5 nearby acres uses a native seed mixture including quailbush as another potentially effective Atriplex species (lentiformis) for phytostabilization.

Quailbush also was tested under greenhouse conditions using low- and medium-pH samples— more typical of mining sites— collected from lead/zinc tailings of the Klondyke mine, a state-designated Superfund site in Arizona’s upper Aravaipa Valley. Lead concentrations at this site exceed 20,000 mg/kg, and no vegetation remains. Due to wind and water erosion of tailings, downstream fish in Aravaipa Creek exhibit elevated levels of lead and cadmium. The greenhouse tests evaluated germination, growth, and metal uptake of plants in tailings amended with 0 - 25% compost (by weight). Results showed that a tailings amendment of 15% compost was required for normal plant growth. Bacterial analysis of tailings after plant growth indicated a 4- to 6-fold decrease in the autotrophic microbial populations associated with the site’s acidic and stressed soil/plant conditions. Plant shoot tissue analysis showed little accumulation of metals.

Results from both sites demonstrate significant potential for native Atriplex species to stabilize mine tailings in arid and semi-arid environments. Current SRP tests evaluate effectiveness of other native species as well as plant-growth promoting bacteria with potential to minimize the compost amounts needed for plant establishment. For details on these and other SRP studies, contact Monica Ramirez, University of Arizona (ramirez@pharmacy.arizona.edu).

On July 17th, the University of Kentucky Superfund Research Program was featured on WUKY-FM's weekly EnviroMinute series, which airs on Tuesdays immediately following the noon newscast. The UK-SRP segment [ see script (18KB) ] provides a brief description of program research and an overview of Community Outreach and Research Translation functions, ending with contact information for those who wish to learn more.

The EnviroMinute is sponsored by the Bluegrass Partnership for a Green Community, a coalition of university, governmental, educational, and nonprofit organizations, and by WUKY-FM, the University of Kentucky's NPR radio station. 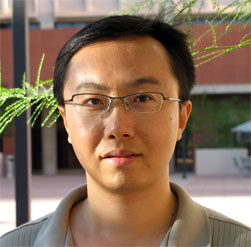 The "Top Three Hot Papers" are identified by the Institute for Scientific Information's Essential Science Indicators as articles published within the past 2 years receiving the most citations over the most recent 2-month period (January and February).

Please join the UA SRP in congratulating Dr. Gao for his important contribution to ES&T, as well as the entire scientific community.

Superfund Research Program (SRP) funded research scientist Roxanne Karimi has found that animals fed nutritious, high-quality food end up with much lower concentrations of toxic methylmercury in their tissues. Karimi is a graduate student in the Dartmouth Department of Biological Sciences working in the SRP Trophic Transfer of Toxic Metals in Aquatic Food Webs project headed by Carol Folt.

Karimi's research results suggest ways in which methylmercury-a neurotoxin that can accumulate to hazardous levels-can be slowed in its passage up the food chain to fish.

"This research provides evidence that by eating high-quality food, organisms may reduce their bodily concentration of a contaminant," said lead author Karimi. "These findings allow us to predict the conditions under which freshwater fish are likely to carry relatively high mercury levels."
The research is reported in a paper titled "Stoichiometric controls of mercury dilution by growth," that was published in the April 23, 2007 online "Early Edition" of   Proceedings of the National Academy of Sciences .

In laboratory experiments, Karimi and colleagues from Dartmouth, Lakeland College, and Stony Brook University, studied the translucent water flea Daphnia pulex, a species of zooplankton that is one of the chief food sources for freshwater fish. The team measured, over five days, the growth of two groups of juvenile Daphnia, which in their mature state are about 2-3 millimeters in length. Both groups were fed the same amount of algae contaminated with trace amounts of methylmercury; however, one group's algae was of greater nutritional value.

The animals that received the nutritious, phosphorous-rich algae grew 3.5 times faster than the other group, the research found. Although the faster growing zooplankton ingested roughly the same amount of methylmercury as the other group, they ended up with one-third the concentration of toxin in their tissues because, as they grew faster, the toxin was diluted.

Methylmercury is a neurotoxin found in all water bodies. While normally present in the water only in trace amounts, methylmercury presents a serious health hazard to humans due to biomagnification, a process in which a toxin occurs in higher and higher concentrations in animal tissue as one moves up the food chain. Daphnia and other zooplankton are a major source of methylmercury for lake fish. When water fleas and other zooplankton grow rapidly by feeding on high quality food, the rate at which methylmercury is accumulated and transferred through the food chain may decrease, the research suggests.

This same effect could occur in other organisms for other contaminants, such as PCBs and DDT, which also biomagnify in a food chain, Karimi said. "These contaminants pose health risks because they tend to remain in the body and so accumulate to high concentrations. When organisms have the optimal combination of nutrients available to them, they are able to gain more weight relative to the amount of toxin they get from their food. This is what results in the process of diluting the toxin by rapid growth."

This study is one of a number of ongoing research projects at Dartmouth that look at methylmercury and other toxic heavy metals in aquatic food webs. Many of these projects are being undertaken by Dartmouth's Center for Environmental Health Sciencesand one of its programs, the Dartmouth Toxic Metals Research Program , which is funded by the SRP.

"One of the most distinctive aspects of Dartmouth's center and the SRP in general is the drawing together of scientists from multiple disciplines to solve problems of significant human impact," said Karimi's advisor and co-author Carol Folt, Dartmouth dean of faculty, professor of biological sciences, and associate director of the Dartmouth toxic metals program. "Dartmouth's program has made great strides in addressing public and environmental impacts of both arsenic and mercury with this approach. Our particular focus understanding the environmental factors that drive mercury to reach some of the highest levels in fish from the most pristine systems is of special value for public policy. Mercury in fish is a worldwide issue of concern, meriting region-wide approaches for effective and timely mitigation and global cooperation."

Chromium 6: A Killer Compound With An Improbable Trigger

Even miniscule amounts of chromium 6 can cause cancer. Blame that do-gooder nutrient, vitamin C.

Brown University researchers have discovered that naturally occurring vitamin C reacts inside human lung cells with chromium 6, or hexavalent chromium, and causes massive DNA damage. Low doses of chromium 6, combined with vitamin C, produce up to 15 times as many chromosomal breaks and up to 10 times more mutations - forms of genetic damage that lead to cancer - compared with cells that lacked vitamin C altogether.

This finding is startling, said Anatoly Zhitkovich, an associate professor of medical science at Brown who oversaw the experiments. Outside cells, Zhitkovich said, vitamin C actually protects against the cellular damage caused by hexavalent chromium, the toxic chemical that starred as the villain in the true-to-life Hollywood drama, Erin Brockovich. In fact, vitamin C has been used as an antidote in industrial accidents and other instances when large amounts of chromium are ingested.

Vitamin C works protective wonders because it is a powerful antioxidant, blocking cellular damage from free radicals. Specifically, the vitamin rapidly "reduces," or adds electrons, to free radicals, converting them into harmless molecules. This electron transfer from vitamin C to chromium 6 produces chromium 3, a form of the compound that is unable to enter cells.

But what happens when chromium and vitamin C come together inside cells? Because vitamin C isn't found in cells grown in a lab, Zhitkovich and his team conducted experiments using human lung cells supplemented with vitamin C. They learned that when vitamin C is present, chromium reduction has a very different effect. Cellular vitamin C acted as a potent toxic amplifier, sparking significantly more chromosomal breaks and cellular mutations.

"When we increased the concentration of vitamin C inside cells, we saw progressively more mutations and DNA breaks, showing how seemingly innocuous amounts of chromium can become toxic," Zhitkovich said. "For years, scientists have wondered why exposure to small amounts of hexavalent chromium can cause such high rates of cancer. Now we know. It's vitamin C."

Hexavalent chromium is used to plate metals and to make paints, dyes, plastics and inks. As an anticorrosive agent, it is also added to stainless steel, which releases hexavalent chromium during welding. Hexavalent chromium causes lung cancer and is found in 40 percent of Superfund sites nationwide. This is the toxic metal, found in drinking water in a small California town, that Erin Brockovich campaigned against, successfully winning residents a record settlement of $333 million in 1996.

Zhitkovich is part of a major Brown research initiative, the Superfund Research Program, which addresses the health and environmental concerns created by hazardous waste contamination. As part of this program, funded by the National Institute of Environmental Health Sciences, Zhitkovich is conducting basic research that may result in a medical test that assesses DNA damage from hexavalent chromium.

Joseph Graziano, Ph.D., SRP Director at Columbia University was elected "Fellow of the Collegium Ramazzini", an international academy of experts in the fields of occupational and environmental health. The Collegium Ramazzini assesses risks in the workplace and the environment. It focuses primarily on identifying preventable risk factors and transmits its views on these hazards and their prevention to policy-making bodies, authorities, agencies, and the public. Congratulations Joe!