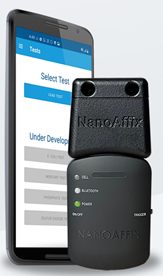 Lead can enter drinking water when plumbing materials corrode, posing a serious threat to human health even at low exposure levels. In adults, long-term lead exposure can increase the risk of cardiovascular and reproductive disorders and decrease kidney function. Children are particularly vulnerable to the harmful effects of lead exposure, such as neurological damage, behavioral and learning disabilities, slowed growth, hearing problems, and anemia.

Rather than relying on costly and time-consuming tests that must be run in a lab, the team hopes to make lead water testing easier and more accessible because the portable device can be used in the home without any training.

Their technology integrates graphene and gold nanoparticles to differentiate lead ions from other chemical ions seconds after the contaminants binds to the surface of the sensor. The sensors can detect lead as low as 0.2 parts per billion, well below the U.S. Environmental Protection Agency's maximum contaminant level of 15 parts per billion. According to the researchers, timely detection of lead in drinking water at the point of use can have important implications for preventing water catastrophes, such as the one in Flint, Michigan.

The team says that portable devices, such as the one they developed, are a first step towards safe drinking water. Their long-term vision is to integrate their technology within existing drinking water infrastructure systems to continuously monitor a variety of toxic contaminants in a larger scale.