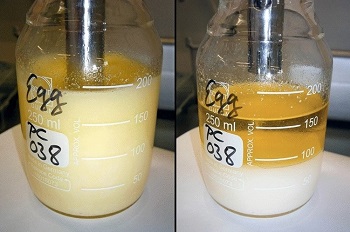 In a new study, funded in part by the NIEHS Superfund Research Program (SRP), researchers improved an approach to remove persistent organic pollutants (POPs) from foods of animal origin. Michael Denison, Ph.D., from the University of California, Davis SRP Center collaborated with a team of researchers from the European Union Reference Laboratory to test several laboratory methods and develop an improved method for the extraction of lipids and associated POPs bound to animal tissue.

POPs include a range of hazardous substances such as dioxins, polychlorinated biphenyls, and other industrial chemicals like pesticides. Several POPs have been found to cause adverse risks to human health, including increased cancer risk, endocrine disruption, and reproductive disorders.

Due to their lipophilic nature, these chemicals are usually found adhering to or dissolved in fatty tissue or milk fat, and exponentially bioaccumulate through the food web. Humans are exposed to POPs mainly through diet, and the leading contributors to exposure are milk and eggs, along with fish, poultry, and other meats.

The European Union (EU) food law requires food samples to be regularly analyzed for POPs to support regulatory compliance. Standard methods for extraction of lipids and lipophilic pollutants are time-consuming, vary in efficiency, and lack reproducibility of results. These limitations have led to changes in regulations and a significant increase in the maximum limit allowed.

To overcome these standard practice limitations, the researchers modified a procedure developed to remove lipids from marine tissue and applied it to animal meat and fat, milk, eggs, and animal based infant foods. They also optimized the procedure in terms of extraction efficiency and abandoned a time-consuming centrifugation step.

This modified reliable method enables official EU laboratories to extract lipids from any food sample of animal origin within 6 to 8 minutes. In comparison to standard practices, this allows laboratories to quickly analyze samples and will result in annual saving of about 32 working days.

These finding significantly contribute to the EU’s need to harmonize analytical results to inform policies. According to the authors, this accelerated approach can also be valuable during contamination incidents when large numbers of samples need to be analyzed as quickly as possible.