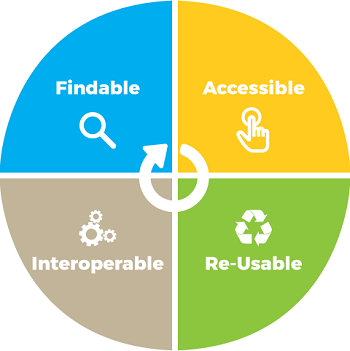 The NIEHS has adopted the "FAIR" guiding principles to support the reuse of scholarly data. (Photo courtesy of St. Lawrence Global Observatory)

The Data Science and Sharing Mini-Workshop fostered discussion and collaboration among researchers involved in SRP Data Supplements. With these supplements, the SRP encourages data sharing among its grantees to accelerate new discoveries, stimulate new collaborations, and increase scientific transparency and rigor.

Rick Woychik, Ph.D., Director of NIEHS and the National Toxicology Program (NTP), and Shelley Stall, Senior Director for the American Geophysical Union's Data Leadership Program, provided presentations during the event. Woychick discussed the new NIH Policy for Data Management and Sharing and expressed how much of a priority data science has become. Stall explained the importance of making data findable, accessible, interoperable, and reusable (FAIR) and spoke about the state of open data on an international level. She emphasized that collaboration and a community of practice is a critical component of data sharing.

The divergent roles brainstormed about how to enhance communication and collaboration within a center, among the SRP, and with its stakeholders. They worked together to come up with a set of best practices based on their own experiences.

Each session built on the other and helped to inform how SRP continues to advance its growing data science endeavors. For instance, the data scientist breakout discussion identified the need for a coordinated communication platform, a centralized data sharing repository, and a standardized tool for sharing codes and standards. In the researcher breakout discussion, participants reviewed the advantages of regular project team meetings and how to increase the interoperability of citizen science datasets with data generated or used by SRP-funded studies.

SRP Director Bill Suk, Ph.D., said he was impressed with the work toward improving how SRP data can be shared and leveraged to gain new scientific insights. He also emphasized the importance of involving trainees, so they are equipped with the skills needed to move the field forward in the future.

The strategies proposed during this meeting will continue to be parsed out later in February. Members of the SRP data supplement project teams will meet again virtually to share advances made towards data interoperability using SRP data sets.

This event served to enhance engagement and collaboration between SRP grantees and stakeholders, including staff from the U.S. Environmental Protection Agency, the U.S. Department of Energy, the U.S. Nuclear Regulatory Commission, and increase awareness of ongoing research. The virtual format allowed for diverse interactions between people involved in detecting and cleaning up contaminants at hazardous waste sites and those who are developing tools to improve detection and remediation.

Participants leveraged best practices, exchanged real world knowledge, and offered opportunities to trade samples, sites, and ideas to further improve their technologies. Additionally, stakeholders were provided with materials for reference and for following up with the presenters after the event.

Each small business representative introduced a tool that functions to remove or detect several classes of environmental contaminants, such as per- and polyfluoroalkyl substances, chlorinated compounds, and metals. Some of the technologies included a wearable mercury vapor sensor, passive polymer sampling devices, and a novel groundwater remediation system.

Project leaders answered questions from academic researchers and staff from NIEHS and other federal agencies. A few of the small business grantees also provided short videos that explain their tool and how it can be used.

Several of the technologies at the fair spun out of research projects from SRP centers. Grantees who had previously worked on these University projects went on to form small businesses that are now supported through SBIR.

In closing remarks, Suk applauded the progress and encouraged further exploration of creative and interesting ways to harness these technology transfer initiatives to reduce exposures and improve public health.

For descriptions of each of the technologies presented during the fair, visit the Virtual Technology Fair Meeting Book.

Each technology overview briefly described the tool and included information about why it is innovative and its technology readiness level. (Photo courtesy of NIEHS)