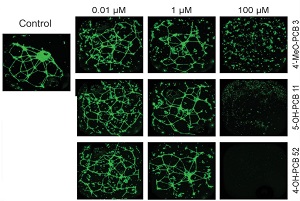 Exposure to different PCBs altered tubular networks in endothelial cells compared to control. Endothelial cells make up the lining of blood vessels in the cardiovascular system. These effects were most pronounced at the highest exposure levels. (Image simplified from Grimm et al., 2020, Environ Health Perspect)

A new NIEHS Superfund Research Program (SRP)-funded study demonstrated a strategy using data from cell studies to characterize how exposure to polychlorinated biphenyls (PCBs) may harm human health, particularly the cardiovascular system. PCBs are a large and complex group of chemicals that often occur in mixtures and can contaminate soil, groundwater, and air.

Researchers at the Texas A&M University SRP Center and the University of Iowa SRP Center collaborated to test the effects of 25 PCBs and 153 of their breakdown products in different cardiovascular cell types. Using advanced data analysis and integration, they ranked the PCB chemicals according to their chemical and physical properties and biological activity. The team identified certain characteristics that could be used to predict how PCBs affect cells. For example, PCBs with more chlorine atoms and oxidized breakdown products were more likely to harm cardiovascular cells.

They also used data science approaches to estimate the potential effects of other PCB compounds and mixtures based on trends in chemical structures and biological activity. According to the team, this strategy can be useful in filling data gaps related to diverse PCBs and PCB mixtures.

To determine the likelihood that exposure to PCBs will lead to health effects, the researchers compared the activity and effects of PCBs in cells at different concentrations with the levels of PCBs measured in a human population. While most people had levels of PCBs in their blood below those which were estimated to cause harm, the researchers emphasized that some people within a population may be more susceptible to these effects than others.