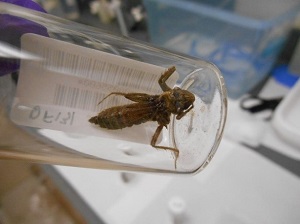 Immature dragonfly larvae can accumulate mercury in their tissues, making them an ideal substitute for measuring mercury in fish and other wildlife.
(Photo courtesy of the Dartmouth SRP Center)

A researcher from the NIEHS-funded Dartmouth College Superfund Research Program (SRP) Center contributed to the first-ever survey of mercury pollution in the U.S. National Park System. The study, built on nearly a decade of research across the country, found that immature dragonfly larvae can be used to estimate the amount of mercury that is present in local fish, amphibians, and birds.

"Researchers needed a proxy for [measuring mercury in] fish since that is what people and animals eat," said Celia Chen, Ph.D., director of the Dartmouth SRP Center. "Fish can be hard to work with for a national-level research program, so it's helpful to be able to focus our research on dragonfly larvae."

The study relied on citizen science, where students and park visitors conducted field studies and collected the dragonfly specimens. The researchers compiled data on mercury levels in thousands of larval dragonflies collected by citizen scientists between 2009 and 2018 from 457 locations across 100 U.S. National Park sites.

These findings were used to develop an index of mercury risk to aquatic ecosystems. The team found that 56% of the park sites were categorized as moderate hazards and 12% were high or severe hazards to fish, wildlife, or human health. Their approach is designed to allow resource managers to evaluate potential exposure and hazards and more thoroughly assess the threat mercury may pose to ecosystem function.

Collectively, this study demonstrates that dragonfly larvae are a simple and cost-effective way to estimate the potential for mercury exposure in fish and wildlife. It also provides a successful framework for engaging citizen scientists.

"The support of citizen scientists around the country created the opportunity for this study to have such significance," said Chen. "This is a terrific example of how public outreach around science can bring results that help the entire country."

Launched in 2007 by Sarah Nelson, Ph.D., of the University of Maine and the Schoodic Institute, the Dartmouth SRP Center extended the work regionally in New Hampshire and Vermont in 2010. With additional funding from the National Park Service and the U.S. Geological Survey, the project was expanded nationally.