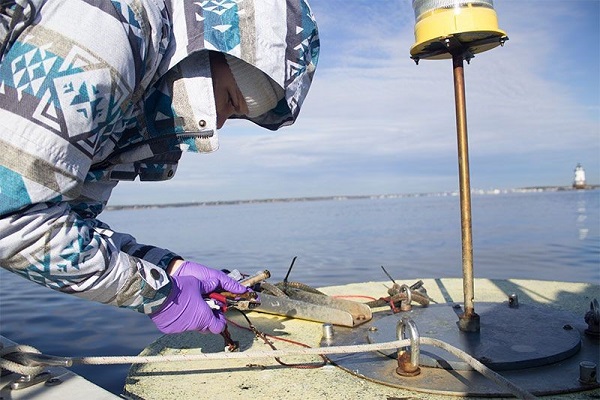 The story featured a photograph of Gardiner collecting water from passive samplers in Narragansett Bay.
(Photo courtesy of XiaoZhi Lim)

University of Rhode Island Superfund Research Program (SRP) Sources, Transport, Exposure, and Effects of PFASs (STEEP) Center researchers were featured in a story in Nature about their efforts to measure poly- and perfluorinated alkyl substances (PFAS) in water, and to understand their movement in the environment and impacts on human health.

PFAS have been used in consumer products like non-stick cooking pans. They also can result from the use of aqueous film forming foams at airports, military installations, and firefighting training sites. Because the carbon-fluorine bond is very strong, PFAS are stable and do not break down quickly in the environment.

The news story described research by STEEP Center project leader Philippe Grandjean, M.D., D.M.Sc., linking higher PFAS exposure in children to altered immune response. His work to measure the concentrations of PFAS in blood samples from mothers and their children in the Faroe Islands began more than 20 years ago and is continuing as part of his SRP project.

Christine Gardiner, a trainee under the guidance of STEEP Center Director Rainer Lohmann, Ph.D., was featured for her work to collect water samples in Narragansett Bay, Rhode Island. Gardiner began this effort after fire-fighting foams were used to prevent combustion when a tanker truck spilled nearly 13,000 gallons of fuel near the Providence River. She plans to use the data to understand how PFAS traveled through the area after it was applied.

The story also described a STEEP Center project led by Elsie Sunderland, Ph.D., to track 30 different PFAS from their sources to where they end up on the environment. Sunderland's project aims to better understand the PFAS concentrations in fish and drinking water from contaminated sites, which will improve exposure characterization for impacted populations.