In Sites Unseen, Frickel Examines Legacies of Industrial Past 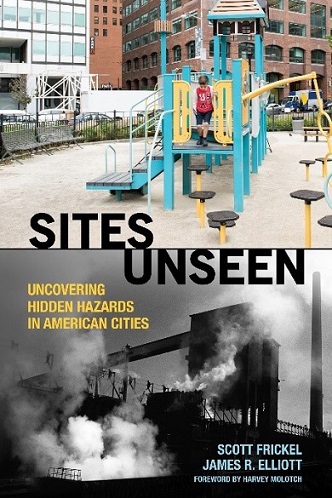 In a new book, Scott Frickel, Ph.D., a professor of sociology and member of the Brown University Superfund Research Program (Brown SRP) Center, discusses the industrial past of four different cities, and how their history helps us to better understand and manage potentially toxic contamination.

In the book, Sites Unseen, Frickel and co-author James Elliott set out to discover former industrial sites in New Orleans, Minneapolis, Philadelphia, and Portland, Oregon. The findings are a direct extension of work Frickel has done to map historical manufacturing sites as part of the Brown SRP Center Community Engagement Core.

Using original data assembled and mapped for thousands of former manufacturers' locations dating back to the 1950s, they found that more than 90 percent of such sites have now been converted to urban amenities such as parks, homes, and store fronts with almost no environmental review. And because manufacturers tend to open plants on new, non-industrial lots rather than on lots previously occupied by other manufacturers, associated hazards continue to spread. According to the authors, their findings suggest that these and many other American cities now face a legacy hazardous waste problem they don’t even know they have.

The book suggests that, over time, risks accumulate over broader areas – including white working-class neighborhoods, lower-income and minority neighborhoods that came before them, and gentrifying areas such as Philadelphia's Northern Liberties. The authors add that the sooner this problem is recognized, the sooner Americans can reclaim their cities and inform environmental regulations that will ensure our collective well-being.